Faulkner’s Light in August is a metaphor. In fact it is many metaphors, almost infinitely many. It is a jumble of allusions, themes, portraits, all of them uniquely important, many of them totally unrelated. In fact no 20th century writer has even approached the sheer quantity of symbolism Faulkner packed into every page, with, perhaps, the exception of James Joyce who went so far as to surpass Faulkner in this regard. So obviously it would be foolish to attempt to trace every line, follow every branch to its root, one could spend a lifetime dissecting the book in this manner. Fortunately, in the midst of this menagerie of wonders, there are dominate themes. There are veins of meaning that permeate throughout. Chief among them; Faulkner’s study of 20th century man’s search for identity, and his compassionate portrait of the origins of evil.

I have come from Alabama a fur piece (Faulkner, p.3). The reader begins the book in this manner, following the simple-minded and 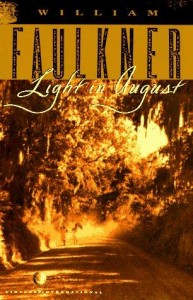 determined Lena as she travels, neither coming nor going, simply moving. Immediately the book draws into her past, relating

events leading up to this point, explaining her motives. One gets a definite feel for her character, and settles into her narrative, but as soon as this happens, the book switches gears, turning instead to a vague character, Joe Christmas. With little introduction, or warning, the book reels into Joe’s past, catching the reader totally unaware and throwing off the entire continuity of the book. Faulkner’s desire for unity and coherence in the

pattern is not as strong as is his desire for truth to individual response (Reed, p.123). Thus Lena is a frame, she serves only to accentuate Christmas’s story, by contrast. Faulkner demands the reader follow, and realize this.

So we now see Christmas’s childhood. From the beginning, Christmas is two things. One, he is a totally clean slate in that he has no idea whatsoever of his past, his origins. He is neither predestined to good nor evil, simply born. By this same token,

“Well, here I am” (Faulkner, p.134). This is the first thing The boy Christmas says. A fitting statement on his utter aloneness. While Christmas is emotionally alone, he is not left alone by others. Light in August reiterates its themes by a series of different dramatic scenes acted by different examples of the same types (Gold, p.41). McEarhern and the dietitian are essentially the same: Authority figures who try to force on him their own ideas of who he is, or who they want him to be. And the two, identical, dramatic scenes acted by different examples of the same types, are these: When Christmas is carried off by the insane janitor, and when Christmas faints after spending hours standing while McEarhern tries to force him to learn a pointless Catechism. Both scenes

involve Christmas’s inability to resist, as authority figures try to determine who he will be. Both scenes end with Christmas being more confused than ever, yet more unwilling than ever to commit to either picture of himself.

The dietitian does all in her power to convict Christmas of being a Negro, and then, his foster father, McEarhern, tries to force on Christmas an ideology totally foreign to him. McEarhern uses extreme Calvinism to mold Christmas into a purely moral

person, while the dietitian tries to force Christmas into a state of immorality, or at least portray him as such. Forces beyond his control work against him, trying to force him in ways he is not, sending him in contradicting paths.

Inevitably he rebels against these forces, finding refuge in immorality, a wh*re, and later going so far as to strike out against his oppressor, his own father, killing him. This final act of defiance is not so much an act of pure malice, but rather an

irrepressible reaction to the extreme Calvinism. So extreme morality has led Christmas to an act of extreme immorality. And this is where the downward spiral begins.

The youth upon it’s back rode lightly,

exulting perhaps at that moment as Faustus

had, of having put behind now at once and

for all the Shalt Not, of being free at last

of honor and law……..He cried aloud “I

Now Christmas is freed from all morality. When Christmas kills his adopted father he becomes completely immoral. Caring nothing for those around him Christmas has completed his journey from innocent boy to uncaring man. Almost wholly as a reflex to the cruelty of those around him, Christmas has become completely detached from society. This is further compounded by his lack of identity, also a result of the actions of others, and is symbolized by the fact that he is unaware of whether or not he is black. He

drifts through town after town, aimlessly searching for identity, accomplishing nothing.

Christmas meets Joanna and for awhile the reader senses that he may undergo some type of transformation. It seems likely that Christmas will finally reconcile himself, but Joanna betrays him by trying to force her own ideas of who he is onto him, another

reenactment of the scenes before follows, only this time ending in Christmas once again killing the person trying to change him.

The book ends with yet one more transformation for Christmas, this time from the uncaring being he was before, to a being of pure hatred and loathing. Such transformations always occur after the aforementioned scene is reenacted, pushing Christmas further

towards evil, culminating in his bursting into the negro church. Starting life as a pure, Christ-like baby, Christmas undergoes a brutal series of confused scenes, that end in him “entering the negro church as Satan and that is what he has become. Man perverts

the best in himself continually.” (Gold, p.42). Christmas is drawn into evil, by a world that would never let him be anything else. Christmas symbolizes the cause and demonstrates the effect of man’s falling. His dual coloring is an ironic emblem for the divided society in which he moves (Gold p.42).

Finally, Christmas is killed by Grimm, the embodiment of the “divided society” that created him. This is the final reenactment of the reoccurring scene. Only this time, Christmas can no longer resist, and is destroyed. He is force to succumb to the “absurdity that Faulkner finds in human life” (Satre, p.198).