Isolationism is a foreign policy whereby a country decides to exclude itself from relations with other countries; isolating itself in the world.

Example: the U.S. in the 1920’s when they refused to join the League of Nations.  Another example would be North Korea today who purposefully does not interact with many nations.

Unilateralism refers to countries responding to events on their own 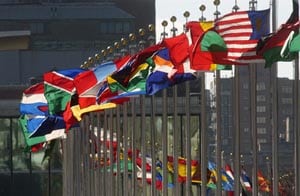 Example: When the arms race began after WWII, there were discussions on arms reduction and disarmament between countries. But these discussions did not go well. As a result, some countries disarmed unilaterally without an international agreement.

Example: Canada and the United States made a bilateral agreement in an attempt to solve the problem of acid rain.

Multilateralism involves several countries working together on a given issue.

Supranationalism is an approach that involves agreeing to abide by the decisions of an international organization made up of independent appointed officials or representatives elected by member states.

Example: the EU is a supranational organization because member states must adhere to EU policies and give up some control over their own affairs.

Internationalism is a political movement which advocates a greater economic and political cooperation among nations.

Example: the WHO is an international organization.