The two had 8 children- four boys and four girls, including Geronimo. The possibility that one of the boys would become chief of he Bedonkohe 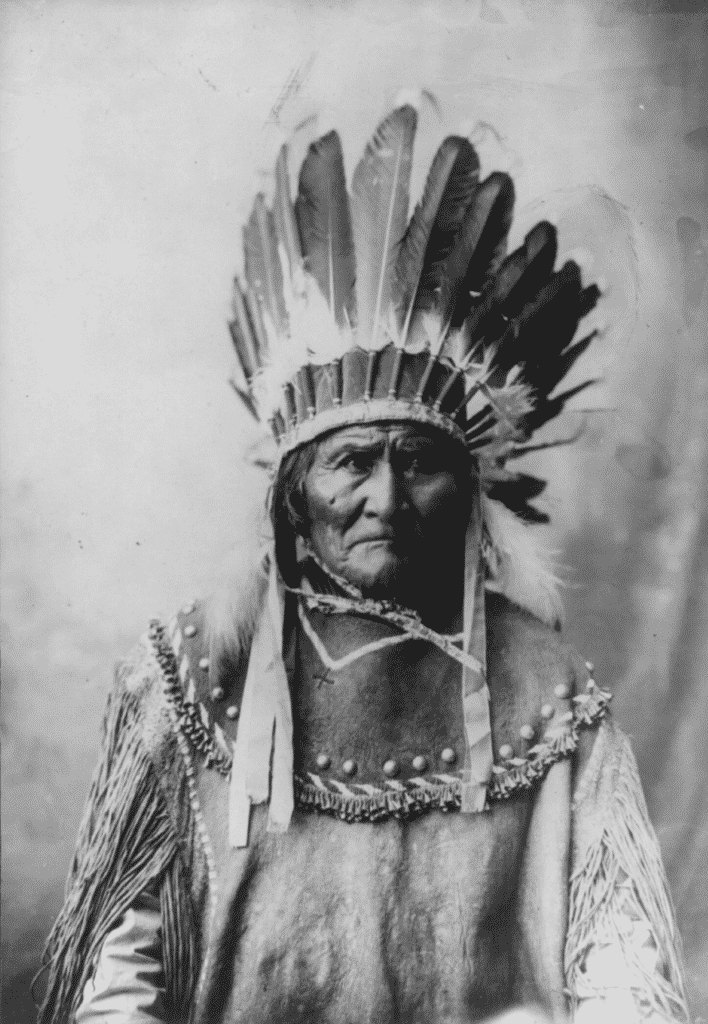 was very slim. His mother taught him the legends of his people; taught him the sun and sky, the moon and stars, the clouds and storms. She also taught him to kneel and pray to Usen fir strength, health, wisdom, and protection.  When the children were young they would play with each other and sometimes with their mother and father. When they were grown up enough to do real services they went to the field with their parents: not to play, but to toil.  They did not cultivate tobacco, but they found it in the wild. All of Geronimo’s tribe smoked, both men and woman. No boy was allowed to smoke until he could hunt alone and kill large game such as; wolves, bear, deer, etc.  Geronimo’s father died when Geronimo was at a young age. They wrapped his father in his finest clothes, painted his face, wrapped a rich blanket around him, saddled his favorite horse, bore his arms in front of him, and led his horse behind, repeating in wailing tones his deeds of valor as they carried his body to a cave in the mountain. They then slew his horses and gave way all his property, as was customary in our tribe, after which his body was deposited in the cave, his arms beside him.  Geronimo’s mother never married again, which was not a custom to the Bedonkohe Apache. In 1846, when Geronimo was 17 years of age, he was admitted to the council of warriors.

If a war had started between tribes he could go on the warpath with his tribe. Geronimo had long desired to fight with his warriors. What he was the happiest about was that he could marry Alope, the daughter of No-po-so. The two had been with each other along time before. So when he got the news that he was in the council of warriors, Geronimo went straight to No-po-so concerning their marriage. No-po-so asked for many ponies in exchange for Alope. Geronimo made no reply, but in a few days Geronimo appeared at No-po-so’s wig-wam with the herd of ponies, and took Alope with him. That was all the marriage ceremony needed in his tribe. Geronimo built a teepee, not far from his mother’s, made of buffalo hides. They followed the traditions and had three children. When Geronimo was 29,(1858) him and almost all the other warriors left to go trade with a Mexican town, Kas-ki-yeh. When the warriors were heading back a few women and children met and told the warriors killed the warriors that were guarding there camp, destroyed their supplies, captured all of their ponies, and killed many of the woman and children.

They quickly separated, concealed themselves as best they could until nightfall, they then assembled at their appointed place of rendezvous- a thicket by the river. Silently they went in one by one: sentinels were placed, and, when all were counted he found his old mother, young spouse, and three children slain. Without being noticed, he silently turned and stood by the river. When the warriors were arranging he took his place. With only 80 warriors left, without arms or supplies, and in the center of Mexican territory, the chief, Magnus-Colarado gave the order to start at once to their homes in Arizona. For 2 days and 3 nights they stopped only for meals. They then made a camp near the Mexican border, where they rested for two days. Geronimo talked to other warriors who had lost something in the massacre, but none had lost as he had , for he had lost all. When they arrived in Arizona he burnt everything Alope had made, the children’s toys, and the teepee.

The warriors of his tribe were all willing to wage war against the Mexicans. Geronimo was appointed to solicit the aid of other tribes in the war.  When he went to the Cohkonen (Chiricahua) Apaches, Cochise, their chief, called a council at early dawn. While the warriors sat on top a mountain dell, Cochise signaled Geronimo he rose and said as follows:

“Kinsman, you have heard what the Mexicans have recently done without cause. You are my relatives-uncles, cousins, brothers. We are men the same as the Mexicans are-we can do to them what they have done to us. Let us go forward and trail them-I will lead you to their city-we attack their homes. I will fight in the front of the battle-I only ask you to follow me to avenge this wrong done by these Mexicans-will you come? It is well-you will all come.

“Remember the rule in war-men may return or they may be killed. If any of these young men are killed I want no blame from the kinsman, for they themselves have chosen to go. If I am killed no one need mourn for me. My people have been killed in that country, and I, too, will die if need be.”

Geronimo returned to his settlement and reported the success to his chief. He then went south and made the same speech to the Nedni Apaches.

It was the summer of 1859, almost a year from the date of the massacre at Kaskiyeh. The three Apache tribes lined up along the Mexican border with their faces painted, the war bands fastened on their brows, their long scalp locks (The scalps were rewarded if a Mexican got one. 100$ for a warrior scalp, 50$ for a squaw scalp, and 25$ for a child’s scalp, all the money was paid in gold) ready for the knives the Indians would have to fight. They were separated into three divisions: the Bedonkohe Apaches, Chokonen Apaches, and the Nedni Apaches. Each warrior had 3 days rations; they usually marched for 14 hours per day, making 3 stops for meals, averaging 40-45 miles a day. Geronimo acted 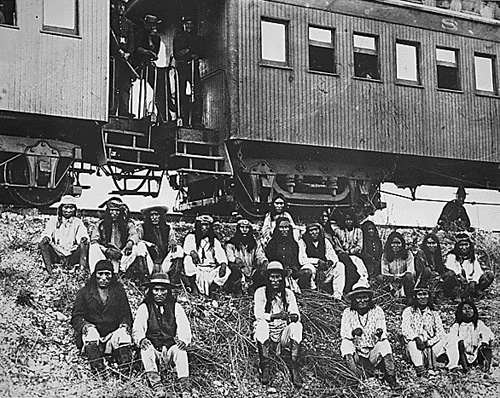 as a guide into Mexico. When they were almost at Arispe, they camped. 8 men rode in from the city; the Indians captured, killed, and scalped them, to draw troops from the city. At about ten o’clock the next morning, as they had expected, the whole Mexican force came out.

There were two companies of cavalry and two of infantry. He recognized the cavalry that killed the people at Kaskiyeh, he told the chieftains and they let him lead the army. He arranged the army in a hollow circle, the Mexican army closed in up until the Apaches and the Mexicans were 400 yards apart when the enemy opened fire. Geronimo ordered the army to charge, but sent some braves to attack from the rear. Geronimo fought with fury, the battle lasted about 2 hours. At the end of the battle there was only four Indians left including Geronimo. Their arrows were all gone, their spears were broken, stuck inside their dead enemies. They had only their hands and knives with left to fight, but all that stood against them were dead. Then two armed soldiers came upon them from another part of the field. They shot down two of the Indians, and Geronimo and another Indian charged toward the enemies. His companion was struck down by a saber. Geronimo picked up a spear he found and turned. The one who pursued him missed his aim, and died by Geronimo’s spear. With the dead man’s saber he met the Mexican who had killed his companion, they grappled and fell. Geronimo killed him with his knife and quickly rose over the corpse. The Apache braves surrounded Geronimo, and they made him the war chief of all Apaches. Geronimo all of the slain enemies be scalped, the Apaches avenged the massacre of Kas-ki-yeh.

At about 1873, they were attacked by Mexican troops once again in their own settlement, but the Apache defeated them.

Geronimo and the Mexicans fought for years, bought once they were settled down, the white man bickered the Apaches. Geronimo got the right to write his book by the President in the early 1900’s. He lived in peace until he died in February 1909.