In the world many people take the gift of hearing for granted because they have never experienced anything else. What people do not realize is that many people have very weak or no hearing at all. With the invention of the hearing 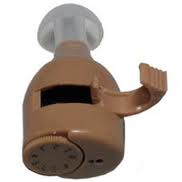 aid, the gift of sound has been shared with many of these people and has been greatly appreciated in society. Hearing aids at the beginning were very bulky and unpractical, but throughout history have developed into light, compact and comfortable objects that greatly increase a person’s ability to hear.

Treatment and testing for hearing loss can be traced back to first century BC to a prominent physician named Archigenes in which “he tested and treated of hearing disorder by sending audible, irritating vibrations to the ear by means of a funnel-like object (Lizzote, 2000)”. This proved that physicians had knowledge of how to amplify sound but no treatment prior to the sixteenth century exists that there were any use of devices to aid in hearing.

In the beginning stages of medicine and medical research any buildup in the ear, nose and throat was caused from the brain and deafness was thought “to be caused by fluid accumulation from a cerebral infection (Lizzote, 2000)”. Crazy remedies such as losing weight, taking laxatives and even a few physicians were found to be using fat of green tree frogs as a remedy to hearing loss. In the 15th and 16th centuries the understanding of hearing loss because anatomists were able to understand the anatomy of the human ear better.

The invention of hearing aids followed the discoveries of the anatomy of the ears. The primary function of early hearing aids was to amplify sound through ear trumpets and ear tubes. These hearing aids proving to eventually be useless were updated by Miller Reese Hutchinson who developed the world’s first practical electrical hearing aid using the transmitting power of carbon to amplify the sound.

READ:
How We Use Our Ears to Hear

Carbon aids were popular through the 1940’s. Most of these used a rather large 3-volt or 6-volt battery but did not have enough power to assist those with more than a moderate hearing loss. (Berger, 1999)

The next step in hearing aid technology happened in the 1920’s with the invention of the vacuum tube hearing aid. The only problem with these devices was the need of a separate battery pack to warm the vacuum tubes.

Portable, unwieldy hearing aids were used, after various improvements, well into the 1950s. However, the invention of the transistor in 1947 revolutionized hearing aid technology. Until then, valves had been used in hearing aids, but the transistor made it possible to build smaller and better ones. The amplifying ability of the transistor was superior to that of valves, and as a consequence the batteries allowed the new hearing aids to be used for longer periods of time.

When the transistor hearing aid came out the size of hearing aids went drastically down. Even with the size shrinking, the quality of sound was not reduced but in turn was greatly increased. “This miniaturization allowed the hearing aid to be worn at or in the ear and still provided the user with a signal quality equal or superior to that of prior hearing aids (Lizzote, 2000)”.

Common to almost all hearing aids up to that date was the use of analogue technology for the treatment of sound. The development of digital hearing aids led to considerable improvements in the effectiveness of the hearing aid. “Digital hearing aids are constructed with a small programmable computer and are capable of amplifying millions of different sound signals very precisely, thus improving the hearing ability of hearing-impaired people (Zaughn, 2002)”. The first digital hearing aids were launched in the mid 1980s but did not become practical devices until the mid 1990s where they were able to be placed either inside or discreetly behind the ear. In many cases digital hearing aids can make such a difference that even people with a profound hearing disability can live an almost normal life.