House of Sand and Fog: Peripeteia

Originating from 5th century Athens, Greek tragedies have existed for centuries, and are still present today. A tragedy is a serious drama that depicts the demise of a prominent figure due to a flaw, or an error in 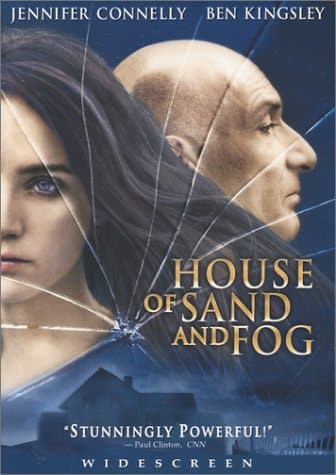 judgment. To venerate Dionysus, the Greek God of wine, tragedies were performed. Vadim Perelman’s House of Sand and Fog exemplifies a Modern Greek tragedy. Like all Greek tragedies, it incorporates a hero, someone of high status who experiences peripeteia, or reversal, and then realizes his or her flaw. It also includes events that evoke cathartic emotions, like fear and pity, from the audience.

Behrani possesses all the qualities of a tragic hero. According to Aristotle, a hero is “a man who is not eminently good and just, yet whose misfortune is brought about not by vice or depravity, but by some frailty. He must be one who is highly renowned and prosperous” (Chapter XIII, page 23). An ex-colonel for the Shah of Iran, Behrani is of high status and (was) auspicious. He is not completely villainous, as everything he does is for his family. He buys Kathy’s house because it resembles his family’s house in Iran; he adds on the porch to add to its value so that when he sells it he will have enough money to support his family. He is not completely virtuous, either. When Kathy’s lawyer tells him that Kathy’s living in a motel, then asks him to give Kathy her house back, he says “ it is of no matter to me”. When Kathy goes to his house and pleads to him, he ignores her and escorts her back to her car. Although his son says, repeatedly, “I feel bad for that woman”, Behrani does not show concern or seem to consider giving the house back. His life is tragic because his son dies in an effort to protect him, and he lost his prosperity so quickly.

Every tragic hero has a flaw. Behrani’s has to do with his former life in Iran. He was a colonel for the Shah of Iran, so he was used to having power and was proud of his status. When the Shah is deposed, and his family flees, his pride results in his being self-reliant, so much so that he does not listen to anyone’s advice or gets angry when someone doubts him. For example, when Officer Lester Burdon threatens to have his family deported, and Nadi expresses her fear, he slaps her out of anger that she does not trust him to take care of everything. His pride also causes him to lack compassion, as he puts his family over everyone else.

READ:
Lab Report: The Impacts of Salinity on Modern Agriculture

Without doubt, the film elicits the cathartic emotions, fear and pity, from the audience. The day after Kathy and Lester move into the cabin, Lester goes to work and finds his wife and kids in the parking lot of his office building. His wife begs him to come back, saying that their kids need them. As Lester turns and walks away, his kids bang on the window of the car, crying “Please! Don’t go!”. At this moment the audience pities the kids. The audience is frightened when Lester barges into the house and, with the gun that Kathy took from him, runs around shouting at the family. When he does not believe their explanation of Kathy’s condition, the audience fears what Lester will do to them because, as Behrani later warns Ismael, “a scared man is dangerous”. Above all, the audience pities Behrani when Ismael is shot trying to protect him. An unpleasant surprise for both Behrani and the audience, it increases the cathartic emotions experienced.

In conclusion, House of Sand and Fog clearly depicts a Greek tragedy. Behrani’s fleeing Iran and moving into Kathy’s house is the hero’s peripeteia. His hamartia is his pride. The film is tragic because at the end the daughter is left to mourn the death of her family. The audience experiences catharsis, especially near the end of the movie. Its relatable characters and tragic events exemplify a Greek tragedy.