Vatican II was the 21st ecumenical council recognized by the Roman Catholic church, which became the symbol of the church’s openness to the modern world. The council was announced by Pope John XXIII on January 25, 1959, and held 178 meetings in the autumn of each of four successive years. The first gathering was on October 11, 1962, and the last on December 8, 1965.

Of 2908 bishops and others eligible to attend, 2540 from all parts of the world participated in the opening meeting. The U.S. 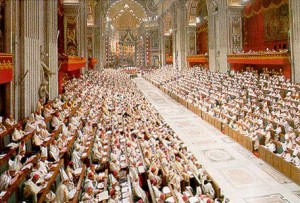 delegation of 241 members was second in size only to that of Italy. Asian and African bishops played a prominent role in the council’s deliberations. Only Communist nations were sparsely represented, the result of government pressures. The average attendance at the meetings was 2200.

Vatican II, as we can clearly see from the above information, was a very large and important meeting in the Roman Catholic Church. Vatican II has altered the Roman Catholic Church more that any other council that took place.  It has great significance as it made the church more reasonable and realistic.  The Church, after the council, was much more down-to-earth and open-minded.

One of Vatican II’s changes that took place was that Mass became vernacular. This change was very important because it made people feel more at a personal level when mass was held seeing as though the priest was speaking their language.  It made them feel more at home and increased their understanding and ability to respond.

Another very major and important change that took place due to Vatican II was the relationship with the Church and the world.

“The Church is a human organization steered by the Holy Spirit and composed of the gifts and talents of its members.  It is acknowledged that at this time the Church community has not yet reached its highest potential and is faced with the limitations and of human shortcomings and temporal constrictions.  With an understanding of its abilities and its boundaries, the Church seeks to work with the world community to come closer to the life to which God calls the world.”