After taking Poland, Germany turned towards Northern Europe.  In April, 1940 Hitler attacked Denmark and Norway.  It took only two months to take these countries.  He then turned towards Holland, Luxembourg and Belgium in May.  The Blitzkrieg proved to be too much for these countries as well. 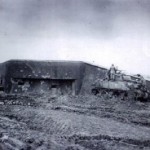 After WWI France had developed an intricate line of defense known as the Maginot Line.  This was a heavily armed tunnel system that spanned the entire border between France and Germany.  It made the French feel safe from any German attack.  On May 12, 1940 Germany invaded France.  Instead of attacking the Maginot line, the Germans simply went around it.  The Maginot line proved to be an expensive joke that was never used.

The Miracle of Dunkirk

When France was invaded Britain sent in troops to help defend the country.  Both France and Britain though were not prepared for the speed of the Blitzkrieg.  The German army forced the allies back to the French city of Dunkirk where they remained trapped.  The allies faced certain defeat while Hitler prepared the Luftwaffe for the final blow.  In his delay the British sent out a call for help.  Nearly 900 ships (including fishing boats and passenger craft) came across the fogy English Channel.  Between May 27 and June 4 over 300,000 soldiers were evacuated to England from Dunkirk.  It was expected that only 10,000 would have survived.

READ:
Totalitarian Regimes of Hitler and Mussolini
READ:
The Bombings of Hiroshima and Nagasaki

The Fall of France

On June 13, 1940 Paris was occupied by Germany and two weeks later France surrendered.