There are many economic issues facing the nation today.  While some are extremely important in determining how the economy is balanced, others are not.  Although this is true, that does not necessarily make these lesser important issues obsolete.  Take, for example, the recent issue of corporate leaders matching contributors to the 401(k) plan with company stock, instead of with cash.  Though this is a relatively National issue, it still greatly affects a large number of people in foreign areas as well as you and me.  Because of this effect on such a large number of people, it is necessary that this issue be discussed, as will happen within the next few paragraphs.

In the way that a 401(k) stock matching plan is set up; timing is everything.  In a basic 401(k) plan employees put forth a set amount of dollars (usually pre-determined personally by the employee) before taxes are withheld  This portion of  the employee’s paycheck is put toward his or her retirement.  What some companies prefer to do in order to make the 401(k) plan more attractive for employees, is to match each employee’s investment in the plan by a certain percent.   Here is where the problem comes in.  Though some companies match contributors either with cash or with a direct credit to the plan, other companies match with corporate stock.  According to Richard Sasanow, a former assistant of public communications  at Ernst and Young, “many experts consider this to be one of the riskiest investments for a 401 (k)-but may be worth it if you think your company has a great future.” (Sasanow, 45)  A recent survey shows that 18 percent of all companies made their matching contributions this way.  Now for small, fast-growing businesses this would not seem as much of a risk since these companies’ stock are generally on the increase.  But for some large corporations,  this is a great risk for employees since a lot of their retirement money is now based on how well the 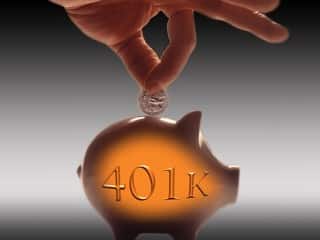 Some say that because contribution matching is now based on how well the company does, then employees will strive to do a more efficient job in order to increase the overall stock price of the company, which, in turn, will increase the amount of retirement they will receive.  Now the problem of timing comes in again.  Mr. Jim Davenport,  a Staff Writer for The State Newspaper uses a good example:  “An imaginary worker for an oil company  was looking forward to retiring at the end of the week.  His 401(k) is fat and has been getting fatter thanks to company stock.  On Tuesday, an oil tanker has a major spill and the stock market trashes the company’s stock.  By Friday, retirement may look a lot less attractive.”  Because that employee had no role in the oil spill, it is safe to say that the idea of employees working harder to increase stock prices is unattainable because of outside forces that employees have no control over.  Now this employee is hurt even though stock prices have been generally rising over the past few years. Sasanow agrees:  “In the case of companies like PanAm, Eastern Airlines or Carter Hawley Hale, which all went bankrupt, employees with company stock got the double whammy because their pension funds went bust and so did their stock.

Though it may seem that employees are virtually powerless against how their company might invest their money, this is not altogether true.  There are rules set forth from the Internal Revenue Service and the U.S. Department of Labor that control how employers  construct their 401(k) plans.  These rules require companies that run their own retirement plans to act in the best interest of the employee.  This seems like the employees have an advantage over the employers now.  But what the rules don’t say is how specific the company must be when acting in the best interest of the workers.  There are obviously some specifics that must be compromised should a court case come about.

There are many important economic issues that face the lives of each American each day.  Some are large and some are small.  No matter what the size, it is important to take into account that these issues affect a large number of people, no matter what the situation.  The recent issue of corporate stock matches is one that has affected a lot of people both locally, nationally, and internationally.  Based on the information gathered, it is safe to say something needs to be decided on how to handle company matches on 401(k) plans.  The best decision would be to leave it up to the court to decide what is in the best interest of the people and have every company and employee abide by those precedents.  It seems that is the only fair way.