Jane Goodall & the Chimpanzees of Gombe

1) The primary method that Jane Goodall, was she watched the chimpanzees from a distance for months; such methods were ground breaking. Ultimately, the chimpanzees accepted her presence among them and allowed her to move closer. She named the individual chimpanzees she had come to observe, a gesture that went against the long-standing scientific tradition of assigning them numbers and thus anonymity. She observed a range of emotions exhibited by the chimpanzees and insisted that each had an individual personality. She witnessed chimps making and using tools, which at the time was the key characteristic that differentiated man from all other animals. She found that chimpanzees waged war, another characteristic no longer unique to man.

Lack complex language. Though the chimpanzees do have a language of their own, it consists of several grunts and groans which can barely 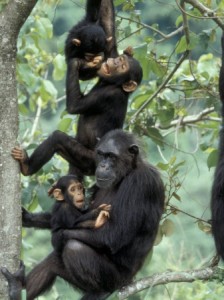 be considered anymore than primate alert calls. Their inability to effective communicate with one another prevents them from develop higher forums of social discourse and society.

Development of Sophisticated Technology. Though the chimpanzees also have the capability to find and utilize tools, they only use them in this most primeval status. The chimpanzees do not take already devised methods and technology and analyze and innovate on them, but merely use simplistic tools to perform their daily routine.

Physiological Differences. Though we share 98.5% of our genetic code with chimpanzees there are several distinct differences which separate us; such as brain size and bi pedalism. The inability for chimpanzees to stand upright or develop larger brains; due to their primarily vegetarian diet, prevents them from developing the mental capacity to become more mental recognitive of themselves and their environment.

Use of Tools. Though the chimpanzees have not developed their tools and technology to anywhere near the levels that human have ascertained, like us, they still use tools. They have demonstrated this ability through methods such as “termite fishing”, which is a groundbreaking correlation between early human development and chimpanzees.

War. Also very much like humans, monkey possess many of the fundamental emotions that humans have; the most aggressive display of them being war. Like humans, the chimpanzees can overtly display deadly aggression toward rivaling chimpanzees groups; this proves their ability to feel and control certain emotions dependence on circumstances around them.

Culture. Finally similar to use chimpanzees have the ability to form cultures based on their location and their associations. As observed by researchers all chimpanzees have the ritual of grasping a branch above their head while they cleaning each other. However depending on their location the tradition varies; some monkeys grasps the branch with one hand, a finger, pull it close to their back, or above their head. They have all developed what is referred to as a “culture”.

4) From observing chimpanzees and observing their very instinctive and primitive behavior, which often correlates with that of our own, we can conclude in many cases how primeval mankind is. We have merely taken many basic functions of chimpanzees’ cultures and complicated them to appear as if they are “more” advance and tolerant of those living under its control. Our government system is merely a more multifaceted variation of the chimpanzees’ alpha male and adult male consult, in which both of us will ascertain positions of power through ambitious and sometimes brute force to control others. The stunning amount of emotional tendencies and behavior we share with monkeys cannot be ignored, especially that of war. Though we have complicated our variation of war with technology, they both lie under the same presences; for territory, resources or social ideology. Finally, the mere fact that chimpanzees continue to develop new methods of interaction with their environment and each other displays duplicate behavior of ourselves. The idea of the perpetual evolution of chimpanzee’s brains and social cultures, parallels our own never ending growth in technology. The chimpanzees merely reflect a society of humans being which lack developed language and technology.