John Paul Stevens, the 101st Justice to serve on the supreme court of the United States, and the first appointed by President Gerald R. Ford.  John Paul Stevens became a member of the high court in December of 1975. Stevens, middle aged man, with a reputation as a sharp-minded, hardworking lawyer, and first rate judge was given the highest evaluation from the American Bar Association committee that examined his record.  “A superb judicial craftsman and a Judge‘s judge, are two of the praises that Stevens has received from the United States Court of Appeals.”

Stevens was voted into the Supreme Court with a vote of 98-0. In that time, Stevens was considered by the press, to be a moderate or 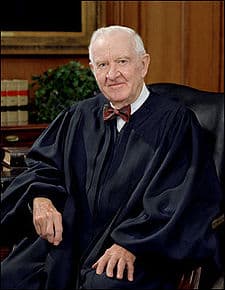 moderate conservative in his legal thinking, and would take sides with other justices Powell, Stewart, and White.

John Paul was born on Apr. 20, 1920. Stevens, the youngest out of 4 sons, Stevens was also considered to be the smartest of the 4. At the age of six, his brother Ernest Stevens noted to a New York Post reporter, “I guess we always knew he was going to make something of himself. He was always awfully smart….When John was six; he could play better bridge then most adults today.”

Stevens attended the University of Chicago High School, and then later went to the University its self. In 1941, he left the University with a Phi Betta Kappa key, and a B.A. Degree. He joined the navy, after the U.S entered World War 2. Stevens was stationed in Washington D.C, as a intelligence officer on the staff of admiral Chester W. Nimitz. He worked with a group assigned to break Japanese codes. For doing this, he was awarded the Bronze Star. After he returned to Chicago, (at the end of the war) he enrolled himself into Northwestern University School of Law to earn his J.D. degree, where he graduated first in his class. Not long after that, he was admitted into the Order of the Coif and the Phi Delta Phi law society.

From 1947 to 48, Stevens spent the year as a clerk to Supreme Court justice Wiley Rutledge. After that, he joined his first law firm, Poppenhausen, Johnston, Thompson & Raymond. A Chicago based firm, which he was inducted to as an Associate.

This was in 1948. With expert guidance from a Senior in the firm, Stevens acquired the expertise in antitrust, that law, that stood him a good stead during 51 and 52, for when he spent time on the Capitol in D.C as an associate counsel of the house Judiciary committee‘s subcommittee on the study of monopoly power and then from 1953 to 55 where he was a member of the attorney generals national committee to study antitrust laws.