Linda McQuaig’s Shooting the Hippo: Causes and Results of Debt

Linda McQuaig’s most recent book, “Shooting the Hippo” is about the causes and results of the debt. It is a look at both the factual causes and the arguments which are merely presented to us through the various elements of the media. McQuaig delivers an insightful overview of the extensive media coverage which has bombarded us over the past few years.  “With the excitement of a mystery writer, McQuaig tells the real story behind the debt.” This book explains the history of the deficit myth, and enables people such as myself who are not experienced in these types of problems to get to the heart of the arguments presented so frequently about our financial situation. I found her book an inspiration which will hopefully help us all to devote ourselves to the enormous challenge which we will face in the future.  We are responsible to inform and educate ourselves, our friends, our families and neighbors in the difficult days ahead.

To explain McQuaig’s title I’ll briefly describe the beginning of the “mystery.” A baby hippo, born in a zoo, is to be shot because of recent 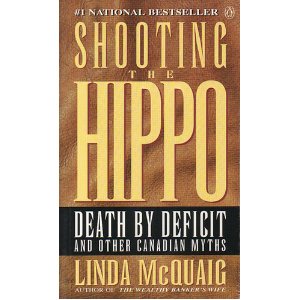 government cutbacks which leave nothing to feed or care for the hippo. This image grabs the attention of the reader and leads to numerous other examples which McQuaig uses to break down the popular myths about the deficit.  McQuaig, determined to expose one by one, several of the current myths about the state of the Canadian economy, backs up her arguments with interviews and publications. These include: a chief statistician at Statistics Canada who has been working on the statistics of social spending since the middle ’60s; the man at Moody’s bond rating service in New York who is in charge of setting the credit rating on our federal debt; and noted economists, among others.

The book goes on in its investigation as to why the recession in Canada was the worst of the world’s most powerful nations. It is noted that if there is a simple way to explain the reason for most of the recession then it will in turn account for most of the increase in the debt. McQuaig also presents a bit of history of banking, monetary systems, and the struggle of the conflicts between the rich minority and the rest of us.  All of this is presented in a very readable and interesting manner.

McQuaig asks an intriguing question to all of us. Are we prepared to see our social programs sacrificed in order to reduce the deficit?  Our political figures would have us believe that there is quite simply  no other option but to give them up,  a view which McQuaig effectively destroys in the 285 pages of this book.  In the end, McQuaig warns us not to let our achievements as a society be sacrificed in the name of deficit reduction.  Her fear is that we, as a society will not be able to find the determination needed in order to succeed.

Over the past few years it has been nearly impossible to open a newspaper without seeing an article on the deficit. The subject of the deficit has been terribly misunderstood, and it continues to be one of our largest problems. McQuaig delivers the message, which is consequently backed up by her interviews that the deficit is not caused by social spending. Contrary to popular belief McQuaig argues that we are no where near hitting the “debt-wall”. She delivers and backs up the argument that fighting the recession, rather than eliminating social programs, would do the most in the attempt to eliminate the deficit.

READ:
The Causes and Impact of Brexit on the British Economy

McQuaig criticizes the media’s uncanny ability to deliver only half the story, and in doing so points out that the media has created a negative image of spending on certain social programs.  In reality, spending on social program has not contributed much at all to the increase in deficit. This is according to a study put out by Statistics Canada.  McQuaig relates that Hideo Mimoto, chief of the social security section, who in fact wrote the study,  shows that increases in social spending have done very little to nothing at all in terms of increasing the federal debt.  The wrong suspects are being brought in for questioning.  Unemployment insurance, which is portrayed so poorly in the media, has created only one percent of debt growth. In comparison one of the largest weights on the deficit was police, military and prison spending. McQuaig delivers the message that if people were really concerned about chipping away at the debt wall, they would be cutting back on police and prisons.  McQuaig effectively presents arguments which give impressive evidence that we are continually being misled by the people in power.