The composer of some of the most influential pieces of music ever written, Ludwig van Beethoven created a bridge between the 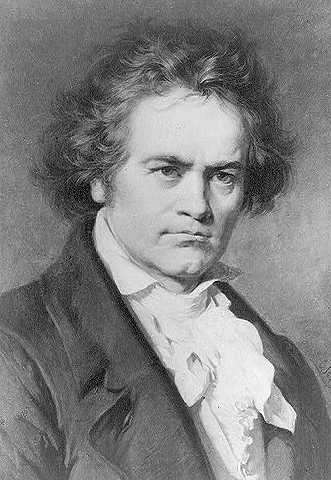 18th-century classical period and the new beginnings of Romanticism. His greatest breakthroughs in composition came in his instrumental work, including his symphonies. Unlike his predecessor Wolfgang Amadeus Mozart, for whom writing music seemed to come easily, Beethoven always struggled to perfect his work.

Ludwig van Beethoven was born in Bonn, Germany, and was baptized on Dec. 17, 1770. (There is no record of his birth date.) His father and grandfather worked as court musicians in Bonn. Ludwig’s father, a singer, gave him his early musical training. Although he had only meager academic schooling, he studied piano, violin, and French horn, and before he was 12 years old he became a court organist. Ludwig’s first important teacher of composition was Christian Gottlob Neefe. In 1787 he studied briefly with Mozart, and five years later he left Bonn permanently and went to Vienna to study with Joseph Haydn and later with Antonio Salieri. Beethoven’s first public appearance in Vienna was on March 29, 1795, as a soloist in one of his piano concerti. Even before he left Bonn, he had developed a reputation for fine improvisatory performances. In Vienna young Beethoven soon had a long list of aristocratic patrons who loved music and were eager to help him.

In the late 1700s Beethoven began to suffer from early symptoms of deafness. The cause of his disability is still uncertain. By 1802 Beethoven was convinced that the condition not only was permanent, but was getting progressively worse. He spent that summer in the country and what has become known as the “Heiligenstadt Testament.” In the document, apparently intended for his two brothers, Beethoven expressed his humiliation and despair. For the rest of his life he searched for a cure, but by 1819 his deafness had become total. Afterward, in order to have conversations with his friends, Beethoven had them write down their questions and replied orally. Beethoven never married. Though he had many friends, he seemed to be a lonely man. He continued to appear in public but spent more and more of his time working on his compositions. He lived in various villages near Vienna and took long walks carrying sketchbooks in which he would write down his musical ideas. Scholars who have studied these sketchbooks have discovered the agonizingly long process that the composer went through in order to perfect his melodies, harmonies, and instrumentations.

Most critics divide Beethoven’s work into three general periods, omitting the earliest years of his apprenticeship in Bonn. Although some pieces do not fit exactly into the scheme, these divisions can be used to categorize the composer’s work. The first period, from 1794 to about 1800, consists of music whose most salient features are typical of the classical era. The influence of such musicians as Mozart and Haydn is evident in Beethoven’s early chamber music, as well as in his first two piano concerti and his first symphony. Beethoven added his own subtleties, including sudden changes of dynamics, but in general the music was well constructed and not far from the sensibilities of the classical period. The second period, from 1801 to 1814, includes much of Beethoven’s improvisatory work. His Symphony No. 3, known as the “Eroica,” and the ‘Fourth Piano Concerto’ are fine examples of this period. The final period, from 1814 to the end of his life, is characterized by even wider ranges of harmony and counterpoint. The last string quartets contain some of the composer’s most vivid new ideas. Beethoven created longer and more complicated forms of music. In his symphonies and string quartets, he often replaced the minuet movement with a livelier scherzo. He also used improvisatory techniques, with surprise rhythmic accents and other unexpected elements.

Many critics and listeners regard Beethoven as the finest composer who ever lived. His music was unique and emotional. Never before had instrumental music been brought to such heights. He also made great strides with chamber music for piano, as well as for string quartets, trios, and sonatas. His works include nine symphonies, 32 piano sonatas, five piano concerti, 17 string quartets, ten sonatas for violin and piano, one opera (‘Fidelio’), the ‘Mass in C Major’, ‘Missa Solemnis’, and other chamber music. Beethoven died in Vienna on March 26, 1827. His funeral was attended by hundreds of mourners. The bicentennial of his birth and the sesquicentennial of his death were celebrated with new performances and recordings of all of the master’s works.