The term “martial arts” is a general term used to describe general types of fighting. Most martial arts practiced today came from China, Japan, and Korea. There are hundreds of types of martial arts, each divided into specific styles or systems. Technically, martial arts fall into two 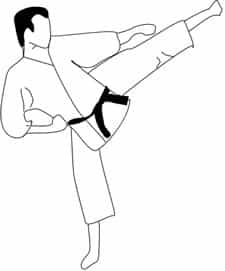 categories: percussive, and non-percussive. In percussive martial arts such as Karate, Tae Kwon Do, and Kung-Fu, people strike with their hands, feed, elbows, and head.  This type of martial arts is very aggressive.

On the other hand, in non-percussive martial arts, such as Judo, involve throwing, locking, and neutralizing the opponent.  They are far less aggressive. Kung-Fu is an interesting type of martial art, the origins of which are unknown. Some historians believe it started as early as 1500 BC There are two major types of Japanese martial arts.  They are Bujitsu, and Budo. The bujitsu martial art is a relatively new one.  It emphasizes combat and willingness to face death as a matter of honor. Budo, which was started during the late 1800’s, focuses on developing moral and aesthetic developments.  Karate-do and Judo are forms of Budo. People who learn budo learn it to use it only as a last resort. Another martial art that developed in Japan is ninjitsu, which means “the art of stealing in!”  People who practice ninjitsu are called ninjas. Ninjitsu was developed in the late 1200’s.  At that time, ninjas were masters of all armed and unarmed combat. Although the emperors banned ninjitsu in the 1600’s, it was still practiced secretly, to keep the value it possesses.   Ninjitsu gained world attention in the 1980’s.This was a report about martial arts in Asia. It listed them, and where and when they originated.