Bruce Lee was born in the Chinese year of the dragon, in the hour of the dragon on November 27, 1940. From the beginning, it was obvious he was a remarkable and unique child with tremendous energy. His mother named him Lee Jun Fan, which meant “return again.” She felt he would return to the United States where he was born while his parents were on tour with the Cantonese opera. A nurse suggested he be called Bruce as an American name for him.

Bruce Lee was born in San Francisco at the Jackson Street Hospital in Chinatown. When he and his family returned to Hong Kong in 1941, he 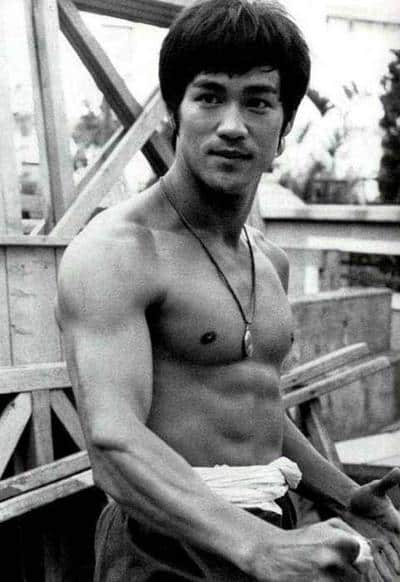 was called Sai Fon, which meant “small phoenix”, a feminine name. Bruce had an older brother who died as a baby. The Chinese blamed this on evil spirits or demons who take the lives of male babies to destroy the family’s name. So they dressed Bruce in little girls clothing and called him Sai Fon.

When they returned to Hong Kong, the Lee household consisted of Mr. Lee, his wife Grace Lee, Bruce’s two sisters, Agnes and Phoebe, his older brother Peter, and later to be joined his little brother Robert.

Bruce grew up in a very crowded house. He lived in a two bedroom flat. Upon the death of Mr. Lee’s brother, he, as in Chinese custom, had to taken in his whole brother’s Family and had to be the provider. This meant nearly 20 people lived in the flat.

It was through his father’s connection that Bruce ultimately became a child film star. His own acting ability was clear from the beginning. Bruce posed as a great natural actor and possessed a great natural ability for acting. His father used to take him backstage. As a young boy, Bruce always hung around the set where his father was working on film.

Few people have started a major film career as early as Bruce did. He was barely three months old when he was given the part in a Chinese movie made in San Francisco. Another movie called “The Beginning of a Boy” he made in Hong Kong when he was six.

Bruce’s favorite saying from when he was just starting Kung Fu up to when he died was, “As long as I can remember, I feel I have had this great creative and spiritual force within me that is greater than faith, greater than ambition, greater than confidence, greater than determination, greater than vision. It is all combined. My brain becomes magnetized with this dominating force, which I hold in my hand.” Bruce had learned this from Master Sifu Yip Man.

Shortly after Bruce entered La Salle College of China (middle school to us), he came home one day and told his mother he was being bullied around after school. He wanted to be trained in the martial arts. His father practiced Tai Chi Chuan, which is a series of exercises and moves carried out in slow motion. Bruce had joined his father once or twice doing Tai Chi, but the slowness of the movements did not appeal to him. His teacher became Master Sifu Yip Man, a master at Wing Chun system of Kung Fu.

Yip Man showed Bruce a way to find direction in life, he interested his young student in the philosophical teachings of Buddha, Confucius, Lao-Tze, the founders of Taoism, and other great spiritual Leaders. As a result, Bruce’s mind became a sponge of the wisdom of such teachers, specifically, but not exclusively, the deep teachings of the Yin-Yang principle. Yin-Yang is generally represented by the double fish symbol, the foundation of which stayed with Bruce and guided him through his adult life.

When Bruce Lee was eighteen years old, his family feared that he would join a gang, so they decided that he should return to San Francisco. This hurt and broke Bruce’s heart to be away from his family. He always made the best out of impossible situations. The trip took eighteen days on a steamship.

Bruce was also an expert dancer, and had won a crown for the cha-cha in 1958. So to pass the time away, he spent most of his it in first class performing and demonstrating the cha-cha. He even showed a few passengers a few dance moves.

Upon arriving to the United States, he wanted to be the first to teach any martial arts, particularly Kung Fu, to the people in his new country. He felt that what he had to offer was far greater than physical martial arts techniques. He soon realized he did not have the necessary manpower of instructors to teach his principles to such a group. Nor would he ever.

Bruce always had a training regiment, one day he disregarded a part of his routine. He failed to warm up properly before beginning his weight lifting routine. He bent over to pick up weights, and he injured his fourth sacral nerve permanently. He was told to give up Kung Fu. Bruce stayed in bed with no movement at all for three months. This made Bruce angry and full of rage. He controlled his anger very well by writing a book with the exclusive help from his wife.  While he spoke the words to write, she wrote them down because of his handicap. Bruce worked himself back to normal very slowly. He died at the age of 32 of hypersensitivity to a combination of ingredients contained in a headache pill someone had given him. But Bruce Lee’s death today is still a controversy, because different people think he died of different ways. Nobody has been proven right, yet no one has been proven wrong.

Bruce Lee had finally found a way in which he could show the vast majority his extraordinary talents. Bruce starred in the show “Green Hornet”. A very popular show in the United States and in Hong Kong. He also starred in a television show called “Longstreet.” “Longstreet” was one of the best martial arts shows of all time on the air. Bruce Lee was also involved with a popular TV show called “Kung Fu,” starring David Carradine.

The essence of Lee’s life was not in the skills he had achieved, nor the money he made, nor the fame he created. To him, his greatest achievement was he made himself, himself. Physically, he turned a skinny frame into a deadly or gentle tool. Mentally, he gave deep wisdom.

Whatever Bruce Lee decided to do, whether it was to be a fighter, an actor, a dancer, or being a friend, he always gave it his all. And in a lot of cases, his all was the best.