[B]asically, I am in Birmingham because injustice is here….

Injustice anywhere is a threat to justice everywhere. We are caught in an inescapable network of mutuality, tied in a single garment of destiny. 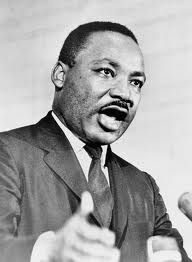 Whatever affects one directly, affects all indirectly. Never again can we afford to live with the narrow, provincial “outside agitator” idea….

You may well ask: “Why direct action? Why sit-ins, marches and so forth? Isn’t negotiation a better path?” You are quite right in calling, for negotiation. Indeed, this is the very purpose of direct action. Nonviolent direct action seeks to create such a crisis and foster such a tension that a community which has constantly refused to negotiate is forced to confront the issue….I have earnestly opposed violent tension, but there is a type of constructive, nonviolent tension which is necessary for growth. Just as Socrates felt that it was necessary to create a tension in the mind so that individuals could rise from the bondage of myths and half-truths to the unfettered realm of creative analysis and objective appraisal, we must we see the need for nonviolent gadflies to create the kind of tension in society that will help men rise from the dark depths of prejudice and racism to the majestic heights of understanding and brotherhood….

We know through painful experience that freedom is never voluntarily given by the oppressor; it must be demanded by the oppressed. Frankly, I have yet to engage in a direct-action campaign that was “well timed” in the view of those who have not suffered unduly from the disease of segregation. For years now I have heard the word “Wait!” It rings in the ear of every Negro with piercing familiarity. This “Wait” has almost always meant ‘Never.” We must come to see, with one of our distinguished jurists, that “justice too long delayed is justice denied.”

….[A]t first glance it may seem rather paradoxical for us consciously to break laws. One may won ask: “How can you advocate breaking some laws and obeying others?” The answer lies in the fact that there fire two types of laws: just and unjust. I would be the Brat to advocate obeying just laws. One has not only a legal but a moral responsibility to obey just laws. Conversely, one has a moral responsibility to disobey unjust laws. I would agree with St. Augustine that “an unjust law is no law at all”

Now, what is the difference between the two? How does one determine whether a law is just or unjust? A just law is a man-made code that squares with the moral law or the law of God. An unjust law is a code that is out of harmony with the moral law. To put it in the terms of St. Thomas Aquinas: An unjust law is a human law that is not rooted in eternal law and natural law. Any law that uplifts human personality is just. Any law that degrades human personality is unjust. All segregation statutes are unjust because segregation distort the soul and damages the personality. It gives the segregator a false sense of superiority and the segregated a false sense of inferiority….

[I] have tried to say that this normal and healthy discontent can be channeled into the creative outlet of nonviolent direct action. And now this approach is being termed extremist.

Yours for the cause of Peace and Brotherhood,