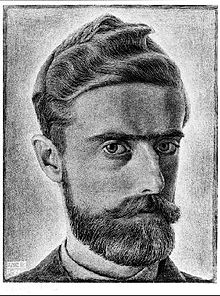 Maurits Cornelis Escher is widely acknowledged for his extensive use of distorted geometrical shapes, tessellations and spatial illusions creating a unique art form that was admired by artists and mathematicians. Through these works of art he contributed to the world of math without having any extensive training or high academic achievements, but yet and still his work were exhibitions of mathematical ideas.

Deterring from his father’s plans for him to become an architect, M. C. Escher grew a great interest in graphic arts. Obtaining a worldwide reputation, he was presented to the public in an article in Time magazine and had his first exhibit in 1956. Mathematicians accepted his accomplishments in art while envisioning principles of mathematics, even though he had no teachings beyond high school in the subject. M. C. Escher quoted: “At first I had no idea at all of the possibility of systematically building up my figures. I did not know…this was possible for someone untrained in mathematics, and especially as a result of my putting forward my own layman’s theory which forced me to think through the possibilities.”( 1958, M.C. Escher,Regular Division of the Plane) His inspirations came from readings he did on many mathematical ideas and with this knowledge, he created projective geometry, structures in plane, Euclidean geometries, paradox and “impossible” figures, and he adopted Roger Penrose’s ideas. The bulk of his work surrounds two main areas: logic of space and space geometry.

Physical objects have a spatial relation which is necessary is considered the “logic” of space, when these are disrupted they become visual paradoxes or optical illusions. Maurits understood the relationship between geometry of space and logic of space determining one another. He used to experiment with light and apply it to the logic of space, and when using concave and convex objects he would shadow. He was also very particular about perspective, using vanishing points creating an illusion of infinity for the eye. In doing this and using certain vanishing points, he could make the elements in a picture shift. He also created a three dimensional object from a two dimensional representation, one of his works if based around the idea of Roger Penrose’s -the impossible triangle.

M.C. Escher contributed with tessellations, which are arranged closed shapes that cover a plane without touching or overlapping and no gaps. He was intrigued by “metamorphoses”, during 1957 his essay on tessellations has a quote in which he remarked: “In mathematical quarters, the regular division of the plane has been considered theoretically….Does this mean that it is an exclusively mathematical question? In my opinion, it does not. Mathematicians have opened the gate leading to an extensive domain but they have not entered this domain themselves; they are more interested in the way in which the gate is opened than in the garden lying behind it.” Mathematicians showed that all of the regular polygons, only the triangle, square and hexagon should be used in tessellations. Escher used reflections, glide reflections, translations, and rotations to widen his pattern availability. 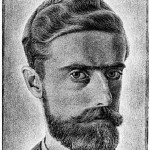 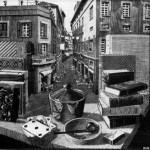 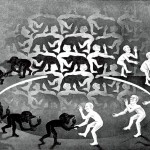 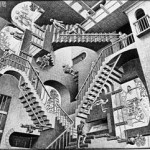 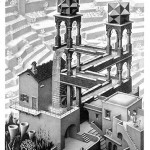 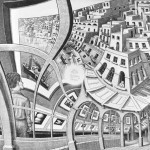 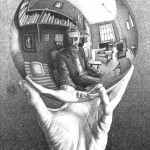 In conclusion, M.C. Escher made a great deal of contributions to Algebra and math as a whole. He was a man who was very humble who neither considered himself a artist nonetheless a mathematician, but without outstanding training he still became a huge factor in how we use geometry today.