The Namib Desert is a parched and rippled desert, an endless expanse. It stretches along the wouthwest coast of Africa from Angola in the north, through Namibia, into South Africa. 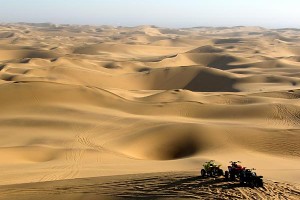 the Atlantic Ocean. The Namib has an approximate area of 170,000 sq km (65,640 sq mi). It rises from sea level 914 m (3,000 ft). Temperatures average 16 deg C (60 deg F). Sands, varying from yellow to red in color, form dunes reaching 240 m (800 ft) in height. The annual rainfall averages only 25 mm (1 in), but high humidity results in fog and dew. In the north deeep canyons have been cut by streams. The area’s main rivers, the Orange and the Cunene, follow the southern and northern borders, respectively, of Namibia.

One river, the Queeseb, is made of water collected from over 160 km (100 mi) inward. The Queeseb causes water holes, for which many organisms rely on for water besides the actual river itself. Acacia trees grow along the rivers, and short grasses and succulents thrive everywhere. One of the most important animals of the area is the baboon. The baboons excavate for underground water that many other animals depend on. There are many other animals that have adapted to live in the Namib Desert farther away from the rivers and streams including 45 species of lizards and more than 200 species of beetles. The nocturnal gecko, like many other animals, burrows in the sand to escape the days heat, 77 deg C (170 deg F). The palmado gecko drinks the moisture that forms on its own body from the fog and dew, as does the sidewinder snake. The sidewinder has adapted a special way of moving in the loose sand which gives it its name.

READ:
The Five Themes of Geography

The backflip spider uses a mixture of sand and silk to create shade to keep it cool. Some beetles extract moisture from trenches made in dunes. Much of this knowledge about the animals of the Namib Desert is made possible by a research institute in the desert that was established in 1963. The Namib Desert is a harsh biome to live in, but organisms have still adapted to life there and formed their own unique ecosystems.