Narcissism in Anne of Green Gables

Narcissism can be seen throughout the book Anne of Green Gables. Narcissism has been defined by the Oxford Paperback Dictionary as “abnormal self-love or self admiration”. Narcissism is also synonymous with vanity, conceit, egotism, self-importance and arrogance. The narcissistic tendencies in Anne seem to change throughout the book and are often displayed through her imagination.

When Anne arrives at Green Gables she is an orphan and has never learned to love anyone but herself, this changes primarily 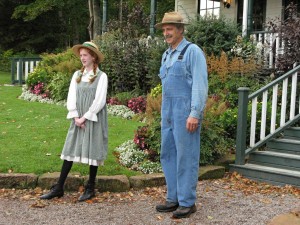 through her relationships with Matthew, Marilla and Diana. Anne’s egotism can be illustrated in the initial chapter’s when Anne is meeting Matthew and Marilla she asks them if they will call her “Cordelia” because “It’s such a perfectly elegant name.” (Montgomery p24) Anne can’t seem to find any romance in her name and romance is very important to her. She settles on Anne, but it must be Anne spelled with an e because “It looks so much nicer.” (p25) The “Cordelia” reference also illustrates narcissism through the reference to Cordelia, in Shakespeare’s King Lear. In King Lear, Cordelia will not give in to her father’s (King Lear) narcissistic demands for love and Anne identifies very closely with this heroine. Anne substitutes her victimizing orphan situation for her imagination and identification with heroines such as Cordelia.

Anne’s first meeting with Mrs. Rachel Lynde lays the foundation for a proper demonstration of vanity.  Anne is offended by Mrs. Lynde’s comments about her appearance and this causes her to have a terrible outburst of anger. Anne must subsequently apologize to Mrs. Lynde. She puts forth a tremendous display of humility and is very pleased over the thoroughness of her own apology. Marilla sees Anne “… reveling in the thoroughness of her abasement.” (p74) Anne comments to Marilla “I apologized pretty well, didn’t I?” (p75) Anne continues to explain to Marilla that she “boils over” when people make fun of her looks. Marilla responds by telling Anne that she is a vain little girl and shouldn’t  think so much about her looks.

Anne meets Diana and they become “Bosom Friends”. Diana is Anne’s first true friend. Their friendship blossoms and they spend as much time together as they possibly can. When Anne enters school she meets many other children and because Gilbert Blythe makes fun of her hair she immediately dislikes him. An  intense academic rivalry develops between the two of them. This rivalry is may simply be vanity showing itself again so Anne can prove to everyone that she is the best student in the school. Or perhaps Montgomery uses the antagonism with Gilbert to set the stage for future interactions between the two of them in subsequent books.

Anne and her friends, especially Diana play, imagine and grow together. Anne and her friends are ‘typical’ little girls. They obsess about their hair, clothes and want more than anything to be just like everyone else. Anne even acknowledges her own vanity when she is caught comparing her nose to Alice Bell’s. “I was comparing it with my own nose and that’s vanity. I’m afraid I think too much about my nose ever since I heard that compliment about it long ago.” (p207) When Anne mistakenly dyes her hair green in a vain attempt to turn it black we once again see how Anne’s narcissism gets her into trouble. Anne later states “Dyeing my hair cured me of vanity.” (p227)

It is this growing  that helps Anne to become less self-absorbed. Toward the end of the book Anne is far less concerned about her appearance and focuses on her academics. Anne learned each and every lesson ‘the hard way’ and Marilla paid very close attention to not encourage Anne’s vanity. When Anne finished first in the Island on the Queen’s admission exams she was conscious of how vain it would have been for her to presume that, it is as if she was keeping her vanity in check. It has been demonstrated that Anne’s transformation from the overt, blatant narcissistic child to a young, conscious adult is one of the predominant themes of this wonderful book.