Anne Sullivan Macy was born on April 4, 1866 in Feeding Hills, Massachusetts. Her parents were poor Irish immigrants. Anne had 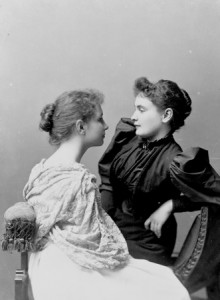 trouble with her eyes her whole life. When Anne was eight years old her mother died and two years later her father left. Anne’s younger sister went to live with relatives and Anne and her younger brother Jimmie were sent to the State Infirmary, the almshouse at Tewksbury. They were sent there because Anne was too blind to be useful and Jimmie was lame with a tubercular hip. Jimmie died a few months later and Anne stayed there for four years. In October of 1880, when Anne was 14, she went to Perkins Institution and learned to read Braille. While she was there she had an operation on her eyes which allowed her to read normally for a limited amount of time. She stayed at Perkins for six years and graduated valedictorian of her class. Anne Sullivan Macy arrived in Tuscumbia, Alabama to be Helen Keller’s teacher on March 3, 1887. She began spelling into Helen’s hand and after about a month Helen “made contact with reality”. When Helen was older she went to Radcliffe College. Anne “read” her all the texts that were not available in Braille. This eventually caused Anne to completely lose her sight.

A year after Helen graduated from Radcliffe, Anne married John Macy, but their marriage soon broke up because Anne was too dedicated to Helen. Anne’s vision began to deteriorate to the point that she could no longer be sure where she was going in unfamiliar places. She wasn’t well and they didn’t have a lot of money. In early 1913 they went on the lecture circuit. It didn’t take very long before Anne became very sick and they realized that they couldn’t do it alone. Helen decided to accept a pension that she had previously declined from Andrew Carnegie. When Anne was well they went on the road again, but this time Helen’s mother was with them. After this tour they met Miss Polly Thomson who became their secretary. They continued to lecture until 1916 when Helen became so obsessed by the war in Europe that the only thing she could talk about was peace. Soon after, Anne got very ill with a cough that was misdiagnosed as Tuberculosis. She was rushed off to Lake Placid and then went to Puerto Rico where she got the rest that she needed. When she came back, they were offered a large sum of money to make a factual movie about Helen’s life. They went to Hollywood and made the movie, but it was very embellished and it failed in the box office. At this time they were very poor, so they tried vaudeville. In 20 minutes they demonstrated how Anne had taught Helen. That was the first time in Helen’s life that she had supported herself, and not only was she supporting herself, she was also supporting Anne and Polly. They did vaudeville for four years. Then in 1923, when Helen Joined the American Foundation for the Blind, she began what she called her life work, “Helping others who were traveling beside her in the dark silence”(19-20). Near the end of Anne’s life her vision was totally gone. Anne Sullivan Macy died on October 20, 1936, having fulfilled her mission to make Helen free. Anne Sullivan Macy wasn’t the first person to work with a person who was blind and deaf, but she was the first person to teach a blind and deaf person to function in a hearing and seeing world. Her work allowed people to realize that it is possible for someone with these handicaps to actually be taught.