Why did the Aryans fear their ”inferiors”? 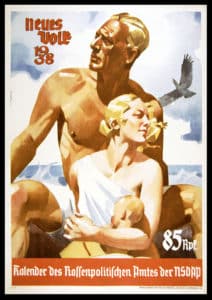 In the nineteenth century, Charles Darwin published his theory of evolution: all creatures change over time, with the strongest surviving: THE SURVIVAL OF THE FITTEST. Many applied this theory to humans. The Nazis believed that they were ethnically ARYAN; superior to all other humans due to their greater level of intelligence and capacity for hard work. The Nazis believed that the reason for Germany’s weakness in the 1920s was that many Aryan men had been killed in the Great War. Once in power, the Nazis encouraged all single Aryans to marry each other and produce as many Aryan children as possible.

As well as looking like an Aryan, it was essential to behave like an Aryan. All Aryans had to make a positive contribution to the VOLK (community). All “unproductive” people – the homeless, physically or mentally disabled, beggars, gypsies, homosexuals, Jews, alcoholics, prostitutes and juvenile delinquents – were considered dangerous to the volk. They threatened the “purity” of the Aryan race, and had to be relegated or removed from society. Nazi theories were of course ridiculous.

When Berlin hosted the Olympic Games in 1936, Hitler expected his Aryan sportsmen to win every event. Although the German athletes did well, the black American sprinter JESSE OWENS, who won several gold medals, overshadowed them. Hitler watched Owens defeat his Aryan sprinters, but left the Olympic stadium rather than have to shake Owens’ hand and present him with his gold medals.

What groups did the Nazis persecute?

Contrary to popular belief, the Jews are not the only people who suffered from the atrocities of the Nazi Germany. Other groups ‘failed’ Hitler’s genetic scrutiny and were compelled to wear a coloured triangle on their clothes to mark them out in public:

How did the Nazis deal with “burdens on the volk”?

PROPAGANDA: as soon as the Nazis gained power, they began a campaign to stir up resentment against these groups.

STERILIZATION: in July 1933, the Nazis passed a Sterilization Law. This allowed for the compulsory sterilization of the “simple minded and chronic alcoholics”. Between 1934 and 1945 around 335,000 “undesirable” men and women were sterilized to prevent them “infecting” the Aryan race.

CONCENTRATION CAMPS: by 1936, many “burdens” were being sent to concentration camps. In one in 1937, 11,000 beggars and homeless were arrested and sent to Buchenwald. They were never seen or heard from again.

EUTHANASIA: in 1939, Hitler began a secret campaign to exterminate many mentally and physically limited babies, children and teenagers by starvation or lethal injection. When news of this leaked to the German public in 1941, Hitler was forced to abandon the policy. Nevertheless, in 2 years 72,000 children had been exterminated on Hitler’s orders.

Why did Hitler persecute the Jews in particular?

Jews had been outcasts in Europe for over 1,400 years, after they had been expelled from Palestine. Many European nations were ANTI-SEMITIC (hated Jews); believing Jews were Christ-killers and money-lenders. Germany was no exception. In 1930, Jews made up less than 1% of the German population; they made up 16% of all German lawyers and 17% of all German bankers. Many Germans were jealous of the financial success of this group on the fringes of German society. The Nazis believed that it was the Jews who were to blame for the Germans losing the Great War; claiming that many Jews had profited by selling ammunition to the German army, then stopped selling these munitions when Germany’s enemies bribed them. It was nonsense, but the idea appealed to many Germans.

As soon as they came to power, the Nazis began a systematic persecution of Germany’s Jewish population:

As the Nazis conquered most of Europe, they gained control over large numbers of Jews, many of whom had fled Germany after the Nazis came to power. The Nazis were faced with a problem, how to rid themselves of all these Jews. Their first idea was mass executions: in the period June-December 1941, the SS (a special unit of the Nazis) shot 500,000 Russian and Polish Jews. 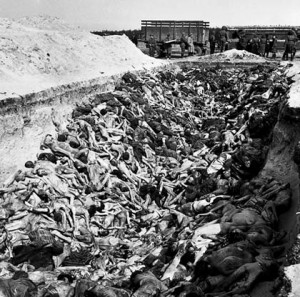 A policy called THE FINAL SOLUTION was developed by the Nazis to deal with the Jews. All Jews were to wear a yellow star and be transported to GHETTOS (walled sections of Polish cities). Many Jews died in the dreadful living conditions of the ghettos. Those who survived were transported in cattle trucks to concentration (or death) camps, which mostly were situated in Poland to hide their existence from the German people. Conditions in the death camps all but defy description.

Did the German people know about the death camps?

This is a very difficult question to answer. The evidence seems to suggest that they did not.

The Nazis had given up their campaign to exterminate the mentally and physically disabled when the German public found out about it. As a result, they had taken more care to hide the existence of the death camps from the German people. Most of them were situated in Poland and called “labour camps”. Those in Germany itself were in remote locations.

Many Germans must have had their suspicions, but when they were confronted with the truth – the terrible medical experiments performed on Jews, gold fillings ripped from Jews mouths, the gas chambers, lampshades made from human skin – their reaction was one of shock and horror. The Allied formed a denazification squad that made movies about the holocaust. Every German was compelled to watch the movies. There was one example of two teenage girls who were seen laughing as they left the movie theatre, They were arrested and forced to watch the movie again alone in the theatre under armed guard. Confronted with these facts, it did not take long for the Germans to be denazified.

Although it would be easy to blame the German people as a whole, the truth is much more complex. The message though is very simple: it is essential that no one ever forgets what happened to these people. You may consider aspects of your life to be terrible, but little can match the sufferings of these groups at the hands of a madman and his followers.

I am guessing the author’s primary intention was to focus on Jewish persecution as stated in the title, “Nazi & Jews: Persecution and Genocide”. But if you post some material here, I am sure they would be more than happy to add it or look into it for another article. They do state in the article though: “Not counting Jews, the Nazis killed about 2,400,000 Poles, 3,000,000 Ukrainians, 1,400 Byelorussians, and 1,593,000 ethnic Russians, all Slavs. They were often murdered because they were Slavs, as Jews were murdered because they were Jews, and the total Slavs thus killed amounts to… Read more »

I feel the lack of inclusion of Ethnic Slavs (Poles, Ukrainians Russians and other Slavic people) is extremely offensive, especially in a educational piece.