At the end of the Battle of Britain in 1940, Germany had failed to gain air superiority over the British Isles. When they turned their attention to Russia Britain was able to rearm and rebuild with great success. They were also aided by the U.S after December of 1941. Britain acted as a beach head for allied troops waiting to invade mainland Europe. The Question was where to invade and when.

The Allies needed information about how to invade Europe. It was agreed that the logical point to make a real push for victory must 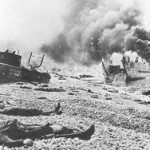 be done through Northern France. A test was prepared to see how well troops and equipment would fair if they were sent to invade the highly fortified defences of the French coast. In August of 1942 Canadian Forces were ordered to take the Port city of Dieppe in northern France. The Allies wanted to see if it was possible to take and hold a port. They also wanted to gauge German responses to an invasion.

It was a disaster. Landing craft failed to reach the beach. Tanks sunk or got stuck in the pebbled beach. Too many aircraft were taken out by Flak guns. Over all a retreat was called in just over 5 hours with over 3000 Canadian casualties.

The Allies learned many things from this raid that they would need to take into account for real invasion of France.

mainland Europe. Millions had died in the fighting and Germany had still not been able to take either Russian capital by 1943. Stalin was getting impatient with the U.S and Britain. He did not feel like they were acting as allies or that the invasions of Africa and Italy distracted enough German forces. He felt like Britain and the U.S were purposefully waiting for Germany and the Soviet Union to destroy themselves in order to gain full dominance over Europe.

As 1943 pressed on into 1944 Stalin became more demanding of a Second front in Mainland Europe to face the Germans.

The Allies decided that they needed to trick Hitler. They created fake army, tank and plane units. From the air it looked like a very impressive build-up of equipment but in actuality they were nothing more than cardboard and balloons. To make it even more likely that this was an invasion force General Patton, one of the most notable Generals in the American army was put in charge of this fake division. It was called the First U.S Army Group or FUSAG.

Combined with GARBO’s messages Hitler fully believed that this unit would be the primary invasion force and that this force would invade France at the closest point between France and Britain Calais.

The Operation was called OVERLORD and was scheduled for June 6th 1944. Rather than land at Calais like Hitler expected, the Allies

picked a beach that was further west on the French Coast at Normandy.

The Beaches were divided up with 2 for the Americans 2 for the British and 1 for the Canadians. Other forces would be brought in if the invasion could successfully hold the beaches.

The Americans had Utah & Omaha The British had Gold & Sword which surrounded the Canadian Beach of Juno. It was seen as a badge of honour that the Canadian forces were given their own beach of invasion. It showed respect to Canada as a partner that can be seen as an equal.

It was the largest successful sea based invasion of land in the history of the world.

Since taking France in 1940 Hitler had been preparing for an invasion of Northern Europe. He turned the entire coast from France through Belgium, Holland, Denmark and German into a huge defensive structure called the Atlantic Wall. It contained pill boxes, bunkers, barbed wire, Dragons teeth, Flak cannons, and heavy artillery. The Allies knew that invading this coast was going to be costly.

In mid August 1944 the Allies put a push on for the French capital of Paris. It is considered to be the last battle in Operation 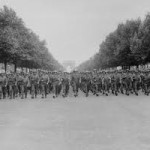 The British and the Americans did not want to take Paris. General Eisenhower of the American forces knew that Hitler had given orders to destroy Pairs if it could not be held. He did not want a French version of Stalingrad. They would have rather pushed on to Germany in order to try and take Berlin before the Soviets.

General de Gaul of the Free French forces demanded that Paris be taken or he would send in his own troops to take it.

The liberation itself started with a small uprising of the French resistance fighters who had been making life difficult for the Germans. The Germans began a tactical retreat when French and U.S forces descended upon the city. By August 25th Paris had been taken but the time that it took removed advantages that could have been gained by pushing East into Germany.

As the Allies pushed forward through France Germany gave one last great offensive which slowed them down in December of 1944 called the Battle of the Bulge. It was a large and deadly tank Battle in southern France. By March the allies had moved on and crossed the Rhine River into Germany the Soviets had already managed to capture huge amounts of German territory in the East.

As the Soviet Armies moved into Berlin in April of 1945 General Eisenhower was only 200 km away on the western side. Churchill kept suggesting that Allied forces move into Berlin and cause a faceoff with Soviet Forces. Churchill and many other anti-communists including General Paton did not want to see the Soviet Union take control of Eastern Europe and Germany. Eisenhower disagreed and sent his troops south to liberate Austria. By late April Hitler had committed suicide and his Nazi government quickly fell apart shortly after. May 8th 1945 the war in Europe was over and it was time to turn Allied attention to the Pacific.