The Eiffel tower, or tour de Eiffel, is located in Paris, France. It is very famous and a wonderful tourist attraction. The wrought-iron skeleton is located on Champ de Mars. It also contains restaurants, a weather station, and spaces for experiments, but they all came at a cost of over $1 million, but the fees for these spaces in 1889 alone nearly paid for it. During World War I, it even was used for a military observation station. Ever since 1953, though, its been used to transmit television programs.

The Eiffel Tower was built for the International Exhibition of Paris of 1889 commemorating the centenary of the French Revolution. 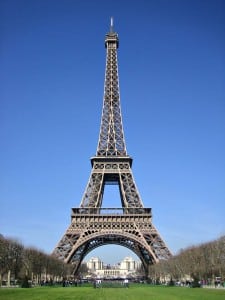 The Prince of Wales (later becoming King Edward VII of England), opened the tower. Of the 700 proposals submitted in a design competition, Alexandre Gustave Eiffel’s was unanimously chosen.

However, it was not accepted at first, and a petition of 300 names – including those of Maupassant, Emile Zola, Charles Garnier, and Dumas the Younger – protested its construction.  At 300 meters (320.75m including antenna), and 7000 tons, it was the world’s tallest building until 1930. Other points of interest include:

It’s height can vary up to 15 cm depending on temperature.

It was almost torn down in 1909, but was saved because of its antenna – used for telegraphy at that time. In 1910 it became part of the International Time Service. French radio, and French television have also made use of its stature.

During its lifetime, the Eiffel Tower has also had a few strange incidents, including being scaled by a mountaineer in 1954, and parachuted off of in 1984 by two Englishmen. In 1923 a journalist rode a bicycle down from the first level. Some people say he rode down the stairs, other accounts suggest the exterior of one of the tower’s four legs which slope outward.

However, if its birth was difficult, it is now completely accepted and must be listed as one of the symbols of Paris itself.

The tower has three platforms. A restaurant (extremely expensive), the Jules Verne is on the second platform. The top platform has a bar, souvenir shop, and the office of Gustave Eiffel.

From its platforms – especially the topmost – the view upon Paris is superb. It is generally agreed that one hour before sunset is when the best view is available.