Objectives: Allies wanted to test amphibious techniques and gather data on coastal defenses and to learn the techniques required to breach the Atlantic Wall along the French coast. Allies also wanted to destroy German coastal defences, port structures, and all strategic buildings, such as the radar post.

Reasons for Failure by the Allies

Following the experience at Dieppe, the British developed a whole range of specialist armoured vehicles which allowed their

engineers to perform many of their tasks protected by armour, most famously Hobart’s Funnies. These vehicles were used successfully in the British and Canadian landings in Normandy in 1944. Improvements were also made in shore-to-sea communications, and many more and bigger ships were used for ship-to-shore bombardment. During Normandy, the invasion was well planned and the Allies actually had the opportunity to simulate the invasion. Also, the lesson from Dieppe was that the element of surprise was critical in the success of the invasion, which the Allies used at Normandy to ensure that they had the advantage of surprising the Germans. The Dieppe raid carried with it a high cost but the lessons learned were invaluable and led directly to the success of the Normandy landings.

The Allies used faulty tanks that had underpowered and unreliable engines. 40 mm gun was also ineffective. These flaws contributed to the tank’s poor performance in its first use in combat, the disastrous Dieppe Raid in August, 1942. In addition to the technical flaws of the tanks, the beach shale made it an unsatisfactory landing ground for tanks.

The Freya early-warning device at Dieppe had a range of 200 Kilometre and it saw Allied aircraft almost as soon as they became airborne under an English sky.

The German defence had automatic weapons, mortars, medium and heavy guns and long-range coast batteries which were effective in the mass assault on the Allies landing on the beaches. The German weaponry was superior. For example, the best in mortars the allies had were 2-3 inch in size, compared to the German’s 81 mm. Adding to the superiority of the German weapons, the cliffs gave elevation and a wide range of fire against the Allies.

The Dieppe Raid, code named Operation Rutter, was a failed attempt by the Allies to invade the beaches of Northern France in 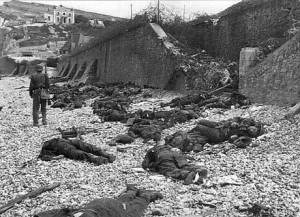 August of 1942. Approximately 6,000 infantrymen, a majority of which were Canadian, stormed up the beaches, supported by Allied air force. The raid was considered simply a ‘test run’ in order for the Allies to have a better idea of what a full-fledged invasion would envision – these plans would soon evolve into Operation Overlord, or D-Day in 1944, as well as influenced preparations Operation Torch – the invasion of Northern French Africa, in November 1942. By invading the German-occupied beaches of France, the Allies essentially appeased the Russians when they began to call for help in war. By planning an invasion on Northern France, the Allies also used Russia’s excuse to allow the Canadian troops to see some action, and thus employed the Canadian 2nd division, composed of 5000 troops. An additional 1000 British troops and 74 squadrons of air cover were provided. The invasion however, was strategically placed in the hands of the Germs who had control on the cliffs, easily shooting down the troops that came pouring out of the landers. Cover for the troops was also minimal, further depleting their army. Additionally, upon storming the beaches, the paratroopers that were to be dropped behind enemy lines to distract the Germans, were held back as a result of the poor weather. This allowed the Germans to divert their full attention to the troops on the beach The Allies also “thought the Dieppe Raid necessary in order to gain experience of the problems that would be encountered in any land invasion of Europe.”[1] This ‘learning experience’ so to speak, was also noted by German Field Marshal von Rundstedt, when he exclaimed: “Just as the defending force has gathered valuable experience from…Dieppe, so has the assaulting force…He will not do it like this a second time.” Thus, the raid was strategic in not only appeasing the Russian call for help, but it also provided the Allies with a stepping stone with which they could base their future attack on the beaches of Normandy. “I have no doubt that the Battle of Normandy was won on the beaches of Dieppe. For every man who died in Dieppe at least ten more must have been spared in Normandy in 1944.”[2]

READ:
The Unfair Extradition of Acadians from Canada