The question is raised within the dialogue between Socrates and Crito concerning civil disobedience. Crito has the desire, the means, and many compelling reasons with which he tries to convince the condemned to acquiesce in the plan to avoid his imminent death. Though Crito’s temptation is imposing, it is in accord with reason and fidelity that Socrates chooses to fulfill his obligation to the state, even to death.

Before addressing Crito’s claims which exhort Socrates to leave the state and avoid imminent death, the condemned lays a solid foundation 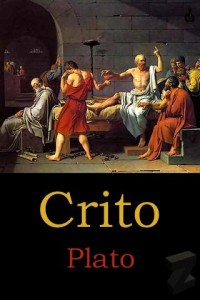 upon which he asserts his obligation to abide by the laws. The foundation is composed of public opinion, doing wrong, and fulfillment of one’s obligations.  Addressing public opinion, Socrates boldly asserts that it is more important to follow the advice of the wise and live well than to abide by the indiscriminate and capricious public opinion and live poorly. Even when it is the public who may put one to death, their favor need not be sought, for it is better to live well than to submit to their opinion and live poorly. Next, wrongful doing is dispatched of. They both consent to the idea that, under no circumstances, may one do a wrong, even in retaliation, nor may one do an injury; doing the latter is the same as wrong doing. The last foundation to be questioned is the fulfillment of one’s obligations. Both of the philosophers affirm that, provided that the conditions one consents to are legitimate, one is compelled to fulfill those covenants.  These each are founded upon right reasoning and do provide a justifiable foundation to discredit any design of dissent.

At line fifty, Socrates executes these foundations to destroy and make untenable the petition that he may rightfully dissent:

READ:
Analysis of A Yaqui Way of Knowledge

Then consider the logical consequence. If we leave this place without first persuading the state to let us go, are we or are we not doing an injury, and doing it in a quarter where it is least justifiable? Are we or are we not abiding by our just agreements?

To criticize or reproach Socrates’ decision to accept his punishment is unjustifiable in most of the arguments. The only point of disagreement with Socrates’ logic concerns his assertion, “expressed” in his dialogue with the laws, that the state is to be more respected than one’s parents. It can be contended that one would never willingly oblige himself to a totalitarian state in which the laws and the magistrates are to be regarded more highly than one’s own family. One would only contract with a government whose power insures the public good and whose establishment seeks to extend to its citizens utilitarian needs.