To this day, humanity does not know the meaning of life.  Of course there are many theories in our society, but this question still 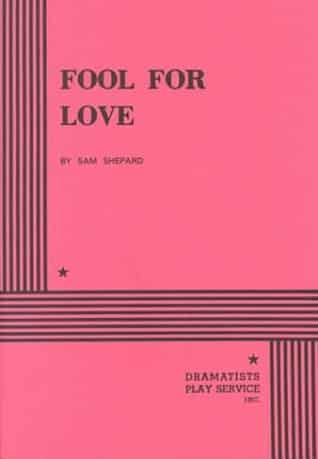 stumps most.  Many make up their own idea themselves, but we may never know.  This lack of knowledge can make us feel powerless in our everyday lives.  Things like tough childhoods and oppression can make us feel even lower, making our sense of right and wrong fade into a grey area. In Sam Shepard’s play, Fool For Love, the characters May and Eddie battle to have the power to control each other because of their traumatic childhoods, which lessens their morality, letting their incestuous relationship continue.

In the text, we are given the relationship between May and Eddie. Martin asks Eddie, “And you fooled around in high school together (Shepard, 32)?”  Eddie replies, “Yeah(32),” confirming that he and May were together in a way in the past.  Eddie later tells Martin how he discovered May was his half-sister and said, “But the second we saw each other, that very second, we knew we’d never stop being in love (34).”  This implies that even after they found out the truth, they stayed together.  Even though these two characters seem untrustworthy and could be lying, the character The Old Man confirms Eddie’s story.  While speaking about May’s mother, he states, “We were completely whole (38),” showing that he had a relationship with her.  Then, he shouts at Eddie, “You’re my son (39)!”  This play also takes place when May and Eddie are adults, showing that they still have some kind of a relationship that has gone on years after high school.  But even though they know they are half-siblings, why do they stay together?

Since the start of their relationship, Eddie and May had a lot of power over each other.  May describes when they were apart from each other when they were younger, saying, “We couldn’t eat if we weren’t together.  We couldn’t sleep.  We got sick at night when we were apart.  Violently sick (37).”  To be that dependent, they had to have a lot of influence over each other.  Of course, this could be a lie they are presenting to Martin, but their current relationship in the script shows how much control they have on one another.  Eddie asks May, “You know how many miles I went outa’ my way just to come here and see you (10)?”  May had the power to bring Eddie 2,480 miles to see her.  Eddie has the power to make May scream, “DON’T GO (9)!!!” when he tries to leave after coming to see her.  They continually fight to be in control in every situation, with May attacking Eddie’s credibility by accusing him of being with the Countess, trying to get him to leave, and Eddie trying to spoil May’s evening with Martin.  It seems like May and Eddie are just the type characters that feel they need to be in control.

May and Eddie both had rough childhoods.  May describes her mother’s depression, saying, “I kept watching her grieve, as though somebody’d died.  She’d pull herself into a ball and just stare at the floor (37).”  But while powerless to help her mom, she had Eddie by her side.  May also announces, “Eddie’s mother blew her brains out (38),” which also could make Eddie feel like his life was out of control.  Eddie comments on his father, stating, “He’d disappear for months at a time (32).”  This must have been the same for May, since their father was the same person.  With their dad gone and both their mothers’ in emotional turmoil, May and Eddie found comfort together. In a youth spent with both kids feeling powerless when dealing with their parents, they turn to trying to control some aspect of their lives, which ends up being one other.  Having so much power over each other lead to their sense of morality for their selves and the other dwindle.  May only had Eddie and Eddie only had May, so this incestuous relationship continued.  And in the search of their own power, they found it easier to control one another instead.

Traumatic childhoods can affect people until the day they die, showing how much power, the environment of our youth has on us.  May and Eddie search for control in this script, hoping to gain a sense of security they lacked from their parents.  Even though their relationship is incestuous, they may find that it’s the most comfort they had in their rough upbringing.  Sometimes comfort can trump morality, letting Eddie and May continue in their power games over each other.  In the end, we are all really searching for relief from our troubles.