The scene is breathtakingly beautiful; a thick brush of purple flowers blankets Canada’s wetlands.  This blanket silences the expected sounds of the wetland environment, birds chirping, ducks splashing, insects buzzing and animals thriving.  This unnatural silence is disturbing, the favourite flowers that used to litter this landscape are no longer visible, the water that used to ripple continuously is perfectly still.  The wetland is dead, except for this overpowering, hardy purple flower that has choked out all other vegetation and species.  Purple loosestrife now controls this landscape.

Purple loosestrife is an exotic species that was introduced to North America from Europe during the early 1800’s.  Europeans sailing to North 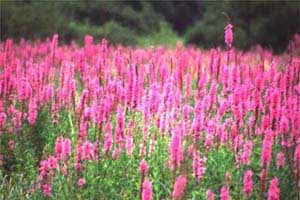 America would fill their ships ballast with wet sand taken from shores of Europe, a habitat where purple loosestrife thrived.  Upon arrival in North America the ballast would be dumped overboard on the shoreline.  By 1830 the plant was well established along the New England seaboard.  Purple loosestrife seeds were also found in sheep and livestock feed that was imported from Europe during this period.  This new organism was introduced to a new habitat free from traditional parasites, predators and competitors, purple loosestrife thrived in the environmental conditions and by 1880 was rapidly spreading north and west through the canal and marine routes.  Purple loosestrife stands also increased due to the importation of seeds and root stalks by horticulturists.  It was introduced to many communities as an herb, an ornamental garden flower and as a desirable honey plant.