Reasons for the Fall of Rome

The causes for the breakdown of the early Roman Republic cannot be attributed to a single event, trend or individual, rather it was due to a combination of all three in varying degrees. The principal and fundamental cause was the breakdown of the political checks and balances, particularly the Cursus Honorum from 133 BC onwards. This subversion occurred both accidentally and through the subversive behavior of individuals, unconsciously and consciously undermining the fabric of the republic in their quest for power and glory. One substantial outcome of this incapacitation was the emergence of violence as a political means. Once this had occurred the end of the old republic was heralded an autocratic dictatorship was born.

The republic was born out of a collapsed monarchy and was specifically geared to prevent a centralization of power. The mechanisms 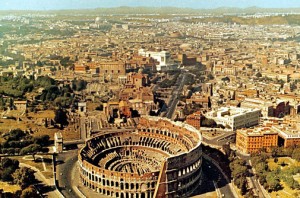 to this end were contained in the Cursus Honorum, a document that outlined the ladder of offices. It demanded, among other things, 10 years of military or legal service before any magistracy could be held, annual election and two years between consecutive offices (Plutarch, 1974. p.140). This system was designed to ensure that no individual could become too powerful by dividing jurisdiction between several groups and allowing for veto.

The Gracchi brothers, Tiberius and Gaius are often blamed for causing divisions and antagonizing the aristocracy and particularly the senate by introducing laws and legislation that, although promoting egalitarianism for the poor, were catalysts to later breaches of the Cursus Honorum. Both Tiberius and Gaius had laws enacted without consulting the senate. This weakened the senate’s power and started a trend of ignoring the senate that remained until the breakdown (Plutarch, 1986. p 176). These Graccian reforms included the implementation of a welfare system whereby Romans citizens would be given free corn and the Lex Agraria or land reforms that broke down the latafundia and increased the number of small-scale farms. The welfare corn system not only aroused violent anger from the nobility but also created an urban mob (Suetonius, 1979. p.42) that relied on handouts and later participated in violence. Tiberius Gracchus ran for election to the tribunate for two years consecutively (123 and 122 BC). This was in direct contradiction to the Cursus honorum. The senate, when they heard of Tiberius’ plan, killed him. This action was significant, due to it being the first time that violence had been used for a political end, it was not to be the last.

Marius and Sulla, great leaders of Rome from 119 to 78 BC, can be attributed part of the blame for the breakdown of the republic. Their constant quarreling led to factional fighting amongst the people and eventually to civil war. Marius came into power before Sulla and, like the Gracchi, showed a tendency towards disturbing the status quo and antagonized the nobility. Marius’ reforms centered on military change, the most controversial of which was the extension of military service for the landless class. This seemingly insignificant reform had wide repercussions since it created semi-professional soldiers rather than a citizen militia (Bradley, 1990. p 270). Since no pension scheme was organized, the soldiers were largely dependent on their commanders for payment and pensions of land. This dependence led to the soldiers being “tied” to their commanders, allowing for the later development of armies that were loyal to individuals rather than to the state. Marius’ contempt for the Cursus Honorum is illustrated by his standing in the consular elections while not in Rome, a post that he gained and held for six years. This action was in direct contradiction to the rule of one-year consulships in the Cursus Honorum and allowed Marius to establish a power base that he used for his own political designs.

Both Marius and Sulla used violence openly as a political means. The first such incident was during the tribunal election where Marius killed Nonnius, a political opponent to his friend Saturnius. This was not the only example of violence from Marius. When returned from exile, he killed everyone who had ever offended him and took their land for himself. Sulla was not much better, having a similar proscription list and sometimes adding names to the list simply to acquire property. Legions of Roman soldiers, who had effectualy turned into private armies, carried out these executions. This practice of obtaining soldiers for personal means led eventually to the widespread use of violence and eventually to civil war.

Close to the end of the republic, a triumvirate arose, combining the three most powerful men in Rome-Pompey, Caesar and Crassus. Caesar engineered the union, using the military and political skill of Pompey and the Financial and political power of Crassus for his own benefit. He manipulated both men to pass legislation and reforms that would spell the end of the republic and catapult him into an autocratic Dictatorship.

Caesar, upon election to his first consulship in 59 BC, was faced not only with a hostile senate, but also a large proportion of the tribunes, acting on behalf of the nobles, that seemed determined to oppose his amendments. A relatively moderate bill to provide pensions for Pompey’s veterans was met with prolonged and systematic obstruction (Bradley, 1990. p336) by the senate. Caesar chose then to bypass the senate and took the bill directly to the assembly where it was vetoed by a tribune named Bibulus. Upon knowledge of this, he presented the assembly with Pompey, who vowed to use violence if necessary to defend the people’s rights. The bill was subsequently passed. Caesar, according to Suetonius, governed alone, and did very much as he pleased. (Suetonius, 1979. p.110)

Each of the men was greedy for glory and power, demanding triumphs and ovations for military and political victories. Their earlier quarrels over such things had been damaging for the republic but their eventual union was to be its downfall.

It is interesting to note however that, in the words of Plutarch. All of these men “came to an inglorious and ineffectual end”. (Plutarch, 1974. p.213)

Close to the breakdown, violence was used almost as a matter of course in political activities. From 133 BC mob violence became commonplace. Many politicians were dragged away and butchered by angry mobs, not the least of whom was Caesar himself. This trend towards violent resolution of political issues is well documented. Pompey used this element to his advantage, stirring up the crowd to the point that people were afraid to speak out against him since if they did, they were liable to be beaten to death by his supporters or murdered by his army.

The culmination of these events and trends was the breakdown of the Republic and the regression into a dictatorship, a system that survived until the fall of the Empire hundreds of years later. The seeds for the fall were planted very early in the form of social and political problems that continued for the Romans long after the breakdown of the republic. Although brilliant in their military and the development of physical infrastructure, the Romans made the mistake of letting the carefully and meticulously placed system of checks and balances fall asunder, taking with it the stability and potential for political egalitarianism that had made the Roman empire great.