Act III, Scene V of Romeo and Juliet is significant for it is the most pivotal scene of this tragic play.  Although prior scenes present extreme 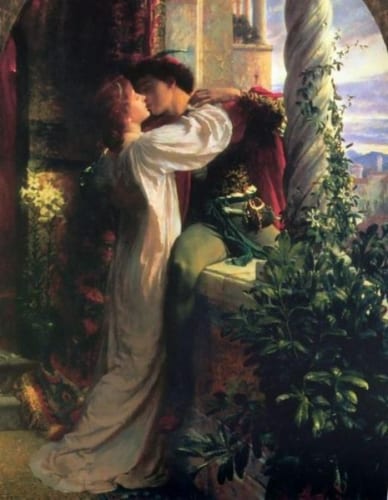 circumstances, this scene reveals the results of past activities and begins a series of tragic misunderstandings and fatal reactions.  Transformations occurring amongst characters and their relationships with one another and the tone of the play are revealed in this scene.  Through language, Shakespeare presents these changes as well as foreshadowing the eventual tragedy Romeo and Juliet’s death.  From this point on in the play there are no more comedic or romantic scenes.  The following scenes are of extreme actions, mishap and tragedy.  The “star-crossed lovers” cannot escape their fate.

One of the many transformations presented in this scene is that of Romeo and Juliet’s love for one another.  Romeo and Juliet’s love makes the transition from infatuation to a deep and sincere love.  In earlier scenes they used overly romantic language and metaphor, whereas, now they speak to one another of their love in a mature and tender way.  They will do anything to be with one another, for their love surpasses any emotion for their familial or community ties.  They are willing to make any sacrifice in order to have their desire for one another fulfilled.  Both Romeo and Juliet enjoy each other’s company on their first morning together following their marriage and they do not want to part.

Juliet’s first visible transformation to adulthood is revealed here.  In Romeo’s desire to be with Juliet, he is willing to risk capture, and most probably death, in being found within the Capulet walls.  Romeo, although maturing in his feelings of love and intimacy is still young and reckless in his behavior.  In contrast, upon rationalizing the circumstance of daylight and their being found, Juliet eventually pleads for Romeo to leave “O, now be gone!  More light and light it grows.” (III, v, 35)  To which Romeo responds, “More light and light- more dark and dark our woes.” (III, v, 36)  The metaphors associated with light (i.e. the sun, the moon, the day) which previously protected their affair is now their enemy.  Nature itself has turned upon them and pushes to seal their fate.  Upon his exit, in a foreshadowing tone, Juliet thinks she sees his body not on the ground, but “as one dead in the bottom of a tomb.” (III, v, 56)  In prior scenes Juliet was mesmerized and infatuated and would not have been able to make Romeo leave.  In this scene Juliet is transformed from that of a little girl, to that of a rational, independent and self-sufficient adult.

Another transformation in Juliet is that in earlier scenes she always followed the wishes of her parents or least did not challenge them verbally.  In this scene, Juliet verbally defies both of her parents by refusing to marry Paris.  Even more boldly, she exclaims that she will not marry anyone other than Romeo.  She holds fast to her heart’s desire despite the foreshadowing threats of her father:

READ:
“Romeo and Juliet”: An Archetypal Analysis of Juliet

For, by my soul, I’ll ne’er acknowledge thee.

Another transition in relationships is that between Juliet and her nurse.  Up until this scene the Nurse was her maternal figure and confidant.  Following her argument with her parents over marrying Paris, the Nurse sides with the Capulets and recommends that Juliet do the same.  Shocked Juliet says, “Speakest thou from you heart?” (III, v, 228)  Juliet feels a responsibility not only to Romeo, but finds it hard to believe that the Nurse would have her break both legal and moral laws in marrying Paris.  She feels betrayed and thus ends her faith in the Nurse and her intimate ties as well, “Thou and my bosom henceforth shall be twain.” (III, v, 242)  Her final hope is to go to Friar Lawrence hoping that he may help her.  She resolves to the idea that, “If all else fail, myself have power to die.” (III, v, 244)

All through the play the lover’s fate is being sealed.  Through Romeo and Juliet’s words as well as the other characters their fate is continually alluded to.  This does not ruin a surprise ending, rather it makes the anticipation of the known fate all the more dramatic and tense.  The audience knows what is going to happen and this scene clearly sets the path for the upcoming series of tragic mishaps to unfold at a rapid pace.  The world of Romeo and Juliet is one which does not understand true love emotions.  It is a world governed by tradition, desire for power, hate, revenge and fate.  There is no room in this world for true love to exist for it is not accepted by the whole as a relevant motivation for the types of actions which Romeo and Juliet take.  Romeo and Juliet’s  world of love and their language of love falls upon the deaf ears of the other characters in this violent world of Verona.  This scene illustrates Romeo and Juliet’s growth as lovers versus a vengeful community which leads to a tragic fate.