The construction of a national political community in India has always been undermined by the absence of homogenous social foundations within its separate nation states.  “Public identity” has never ceased to be polysemous; this plurality is grounded in religion, ethnicity, caste, language, gender, and culture.

Partha Chatterjee defines “inner” and “outer” as a separation of the social space into ghar and bahir, the home and the world (120).[1] The world, domain where material interests are foregrounded, is also associated with the domain of the male.  The home is “unaffected by the profane activities of the material world – and woman is its representation.  And so one gets an identification of social roles by gender to correspond with the separation of the social space into ghar and bahir” (120).  It is of course important to understand that these binaries (male/female; outer/inner) are meant to segregate the colonizing culture from the colonized culture.  In fact, argues Chatterjee, “the more nationalism engaged in its contest with the colonial power in the outer domain of politics, the more it insisted on displaying the marks of ‘essential’ cultural difference so as to keep out the colonizer from that inner domain of national life and to proclaim its sovereignty over it” 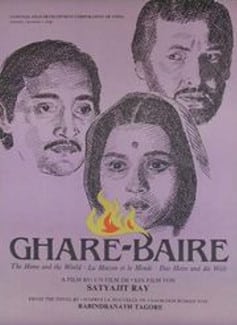 (26).  The material/spiritual dichotomy is therefore of paramount importance to the nationalist ideology.

Ghare Baire (The Home and the World), Satyajit Ray’s 1984 film, subtly but accurately gets to the heart of the material/spiritual dichotomy in 1916 India.  The signification of this dichotomy is foregrounded in the character of Bimala: a young bride at once trapped between the received (yet stultifying) inner world of her marital chamber, and the symbolically alien (yet possibly promising) outer world of the outer apartments.

Bimala’s evolution (through the progress of the film) raises, above all, the question of how identity is articulated and constituted.  Even from the outset of the film, Bimala’s Western-educated husband (Nikhil) is constantly bombarding her with images of what an Indian woman is and is not.  Sundip, the man who awaits Bimala at the threshold of the outer world, finds enormous political self-constitution by appropriating his idealization of the historical (past) into his polemic for contemporary India.

The difficulty for the nationalist movement is that it has to make a demand for identity based upon difference.  How, in other words, does one articulate opposition to Colonialism without replicating it, or creating the categories of “other”?  In Ghare Baire, the solution to this riddle appears to be located in the complete rejection and destruction of any product that is not Indian-made.  But this act, in and of itself, is a hegemonical replication of the Colonial means of maintaining control – and therefore only undermines the legitimacy of the act.[2]

How is this significant to the treatment of gender and the role of women in anti-colonial, nationalist India?  Returning to Chatterjee for a moment, he demonstrates that an “analysis of the nationalist construction of women….shows how, in the confrontation between colonialist and nationalist discourses, the dichotomies of spiritual/material, home/world, feminine/masculine, while enabling the production of a nationalist discourse which is different from that of colonialism, nonetheless remains trapped within its framework of false essentialisms” (134).

In other words, the nationalist movement is constructing itself against the paternalistic ideology that draws upon the status of women in colonial society to justify forms of rule.  And yet, Ghare Baire clearly points out, both Bimala’s relationship to Nikhil and Sundip are negotiated within a patriarchal structure.

On the one hand, Bimala’s intensifying relationship with Sundip represents the universal Indian woman coming into nationhood.  Yet, by tale’s end, it seems apparent that Sundip seeks only power, money, and security (how much more patriarchal could those values be?!) – and, in many ways, he attains all of these through his manipulation of a woman who has been almost entirely sequestered from men up to this point in her young life.  Bimala willingly gives her husband’s money to Sundip “for the cause”; yet we soon learn that Sundip plans to reappropriate a portion of that for himself.  This not only ironically undercuts Bimala’s “contribution” in her role as woman emerging into nationalism, but also darkly provides – in the corruption of Sundip’s character – a larger discourse on the severely divisive corruption of Colonialism, itself.

On the other hand, Bimala’s relationship with Nikhil illuminates the way in which a woman would have to receive (patriarchal) authorization from her husband if she wanted to come into the nationalist struggle.  This prerequisite authorization is a miniature replication of Colonial rule, and is also a reminder of the way in which it (Colonial rule) establishes binaries of difference.  On a different level, Sundip seems genuinely surprised (yet happy) that a woman wants to join the Swadeshi movement.  But we are greatly misled if we believe that his happiness arises from the signification of the act (the rarity, at that time at least, of a woman being a possible Voice for others).  Rather, the film gradually reduces Bimala’s original signification as a potentially significant activist to a hesitant (yet intuitive!) advisor, to the role of negotiator with her husband (negotiating Sundip’s point of view), then to a means of emotional support, and finally to the role of money-lender.

Fittingly, the film ends on a symbolically somber note – as young, richly and darkly-clad Bimala rocks sadly on her verandah, and is slowly transfigured into the simply, plainly, and white-clad widow.  Bimala’s literal reduction as a figure caught between identities and her symbolic reduction from wife to widow embeds the utopian possibility of a homogenous national identity within the ever-constraining patriarchal grip of divide and rule Colonial India.

[1] All Chatterjee quotes incorporated in this essay are taken from The Nation and Its Fragments.

[2] Perhaps Sundip senses this, thus explaining his rather hypocritical consumption of foreign cigarettes!