Steve Delsohn’s, The Emmitt Zone, was a fascinating book. It gave insight into the life of an NFL player, as well as to the life of Emmitt Smith. It was a non-fiction book. Telling of Emmitts life ever since he was big enough to hold a football, to the present day.

Emmitt Smith came from the town of Pensacola in Florida. In his family were his two brothers and his sister. Since his parents did not 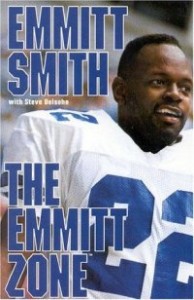 make that much money, and Emmitt wanted to go to college, he knew he was going to have to pay his own way. However, his football skills permitted him to attend college on a full-ride scholarship. No one in Emmitt’s family had ever been to college. So it was a great accomplishment for him as well as his family for Emmitt to be able to attend FSU and eventually graduate from there.

After setting many collegiate football records as a top-notched, blue chip running back, he was drafted by a skeptical Dallas Cowboys football team. Jimmy Johnson, the head coach, knew that he would develop into the type of team leader and player the cowboys needed. Even though owner Jerry Jones was skeptical about the draft choice that Johnson was quietly pursuing.

Emmitt proved to coach Jimmy Johnson that he had made the right pick by setting a record, three straight NFL rushing titles. Not even the great Walter Payton or Jim Brown had ever done this. This is what labeled Emmitt Smith as one of the best football players ever to step onto a turf or grass field. He was quoted by Jimmy Johnson saying, “Emmitt makes everyone around him a better player just by his presence.”