Temper tantrums occur when a child is tired, hungry, uncomfortable, or not feeling well, too warm, or wearing scratchy or tight 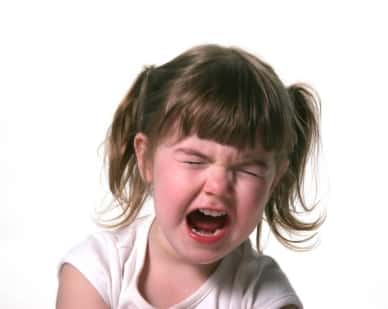 clothing. It’s best to try to find out what caused it so you can try to avoid the circumstances that might trigger another outburst.

Temper tantrums are found to be most common among 3-5 year old children. Boys more often than girls display temper tantrums. A number of behavioral problems are associated with temper tantrums, including thumb sucking, sleep disturbances, bed-wetting and hyperactivity.

Most children displaying temper tantrums come from families in which both the mother and father are present. Researchers suggest that one possible reason for this might be the parents’ expectations and discipline methods conflict. Young children often become confused when parents use different discipline methods, their confusion can lead to frustration and temper tantrums.

Children act by parental example. If adults tend to have outbursts, children are most likely going to follow their example in handling their frustrations. Parents need to learn that they have to control themselves. They can’t expect their children to control their tempers if they can’t control their own.

Physiological needs also are a big part. If a child is hungry or fatigued, they are more likely to have a temper tantrum. Make sure that they child is getting enough sleep and having their meals on time. A small snack after school should also be provided. Be sure that children have plenty of opportunity to play freely outdoors.

Try not to be excessively restrictive in managing your child by setting too many unnecessary rules which tend to provoke temper outbursts. Anger and resistance are natural reactions to stop. So limit controls over your children to necessary ones.

READ:
The Causes of the Showa Restoration

Children prone to temper outburst require close supervision to prevent tantrums, or “head them off at the pass”, early in the episode. If a child starts rumbling and grumbling and seems to be head for an eruption of temper, suggest to the child that something seems to be bothering them and that you would like to be helpful. If the child has difficulty expressing themselves, you might try to put into words what you suspect the child is thinking and feeling. If you have no idea what is bothering your child, ask some questions such as, “Did anything happen in school today? ” or “Are you angry about having to clean up your room?” Even if the child denies that you are correct about what is bothering them, but calms down right away, it’s a good bet that the diagnosis was on target even though the child is too upset to admit it. Parental understanding and concern can go a long way toward reducing unpleasant feelings even if the parent cannot satisfy the child’s immediate desire.

A child who is becoming upset is sometimes easily stopped, just by an adult moving physically closer to the child, expressing interest in the child’s activity, or offering a hug or snuggle. If the child is becoming frustrated, suggest a few ways of solving the problems. But, leave the final choice to the child.

Teach your child how to relax by tensing and relaxing different muscle groups. Emphasize mental as well as physical relaxation by having the child picture a particularly relaxing scene, or deep breathing exercises. By becoming more aware of mental and physical tension, the child prevents the tantrums before it happens.

Tantrums are not completely preventable, but the extent that they are taken to, can be. It all depends on how it is handled, and how the child responds to the handling of the situation.

Putting a lid on Tantrums : Age-by-age

Ages 12 to 18 months
Biggest triggers: Any activity requiring the child to be still, the inability to master a toy or activity, having to give up a toy their

playing with. How to avoid: Don’t keep child immobile for too long. Alternate activities with ones that allow him to moved around. Provide age appropriate toys. Distract them with another toy if you need to remove one.

Ages 18 months to 2 years
Biggest triggers: immobility, unpredictability, not getting their way. How to avoid: Routines help a lot.Also, encourage free play and allow your child plenty of time to move around and at will. If a power struggle does erupt, distract your child with some kind of alternative activity or plaything.

Ages 2 to 3
Biggest triggers: Having to follow rules, such as going to bed on time, sharing and abstaining from biting, hitting, or throwing food. Also, being jealous of a younger sibling. How to avoid: Think carefully about what a two and a half year old can live up to, and keep your expectations realistic. When you do sense a tantrum brewing, give advance warning to cool down, remove your child from the situation, and teach a talker to replace aggressive acts with language.

Ages 3 to 5
Best triggers: Wanting more independence, being frustrated with rules, unable to compromise or share. How to avoid: Demonstrate self-control yourself when conflict arises. When possible, offer your child a choice to give them a sense of control. Steer clear of situations – such as crowded supermarkets when your child is exhausted – that trigger tantrums. Set a few firm limits and be consistent.

Also, encourage your child to communicate his feelings. Older children might benefit from physical outlets, like an old mattress to bounce on.