Origin & Causes of the Korean War

Origins of Korean War Korean War started on the 25th June 1950, but do you know how and why it happened? When someone 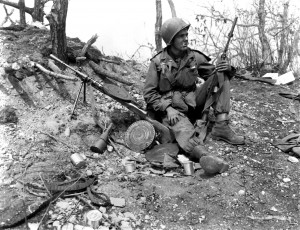 mentions the Korean War, everyone knows that it was a civil war between the North and the South Korea. But, do you know the origin of how it actually got started? There are lot of things that happened, before the North Koreans decided to cross over the 38th parallel. Korean civil war was just a small part of the whole war. The war also included more than just Koreans. What people don’t know is that there were other countries that took a huge part in the start of the Korean War such as Japan, China, Russia, and United States. In the nineteenth century, Korea was just a small peasant society that paid tribute to the Chinese. This small Korean society was nothing more than a part of an inward-looking pre-capitalist Chinese world (MacDonald 3). But when the Russia and Japanese imperialism made a huge effect on the China, Korea was able to come out of its isolation. By the end of the century, Korea had become a prize in a three-way contest between China, Russia and Japan. In 1894, Japan defeated China, thus eliminating them from the contest. Then in 1905, Japan defeated Russia, making them the dominant power in Korea. In 1910, Japan took over Korea and made them into a Japanese colony. As soon as Korea became a Japanese colony, Korea became the Japans expansion into the Northeast Asia. Though Japan tried to pursue a program of modernization, Japans rule was generally unpopular. This created a Korean group called KPG. KPG was a Korean Provisional Government in Shanghai in 1921. This was a self-constructed group that later came to be known as the main source of resistance to Japanese rule in 1930. Man named Kim Il Sung was one of the members of the KPG who stood out amongst the rest.

He later becomes the president of North Korea. After struggling for forty years as a Japanese colony, Korea now had to struggle as a pawn in the newly created Cold War (Hastings 25). The Americans decided to land troops to occupy Korea at the end of the war as soon as they found out that the Russia was interested in overtaking the Korea as their sphere of interest. A Soviet Unions occupying Korea would create and entirely new strategic situation in the Far East. Though Pentagon decided that interest towards Korea was not going to be a long-term interest to the US, their view changed drastically within three weeks. Washington’s view of both the desirability and feasibility to deny at least a small part of Korea changed. On August 10, 1945, dropping of the Nagasaki bomb finalized the participation of the US occupation in Korea. Unexpected by the United States, Soviet Union agreed to accept the 38th parallel as their limit of advance(Hastings 27). Russia and United States met in Potsdam and decided that it would be for the best if they were to accept the surrender of the Japanese forces in Korea by dividing the country at the 38th parallel. This event took place during the summer of 1945. As in Europe, 38th parallel became permanent, violating the US and Russia’s sphere of interest. Russia and the US tried to define the parameters of change, only to find out that they both supported the different sides. While Russia took the left, US took the alliance with the right. This placed the conservatives in control of the security device that was granted by the defeated Japanese. Russia accepted the Japanese surrender in August, and United States accepted the Japanese surrender in September. Through this, Korea had unexpectedly found themselves separated. North Korea was now set up to work as an satellite state for China and South Korea was to become a free nation prepared by the United States. By the year of 1950, the North Korea People’s Army was trained and equipped by the Soviet Union. North Koreans were now heavily trained and now had an aggressive military force. They were well equipped with Russian small arms, artillery, armor, and propeller-driven fighter aircraft(Knox 3). By 1950 the balance power was moved drastically towards the North Koreans, making the South Koreans in a venerable situations. In late spring of that year, the North Koreans had 150 Russian-built T34 tanks, the South Koreans had no tanks; the North Koreans had three types of artillery, the South Koreans one, and in actual numbers of divisional artillery pieces, the NKPA(North Korean People’s Army) exceeded the ROK(Republic of Korea) Army three to one; the North Koreans had a small tactical air force, the South Koreans had none; the North Koreans had seven full-strength combat divisions, the South Koreans four; the North Koreans had 89,000assault troops, the South Koreans 65,000(Knox 4). North Korea decided to unify Korea by direct military action hoping that United States would not interfere. North Korea felt that United States would have too much too lose by interfering, so they went and decided to confront South Korea.

During the period of June 15th through the 20th , North Koreas secretly moved close to the 38th parallel with seven infantry divisions, one armored brigade, one separate infantry regiment, one motorcycle regiment, and one border constabulary brigade(Knox 4). North Korean Forces invaded Republic of Korea territory at 4 AM crossing the 38th parallel in the city of Onjin area, Kaesong area, and Chunchon area. North Korean forces consisted of seven divisions and five brigades, with an air force of 100-150 Soviet-made planes. The main attack was down the Pochon-Uijongbu-Seoul corridor (Knox 5). North Korean tanks participated in the operation, closing in on Chunchon. By 9 AM, city of Kaesong was caputred with some ten North Korean tanks participating in the operation. From the nature of the attack and the manner in which it was launched, it constituted an all-out offensive against the Republic of Korea. When the North Korean troops crossed the 38th parallel on the 25th of June, it was more then just a struggle amongst Koreans. It was actually a clash between Russia and the United States. When a man named Kim Il Sung, a communist leader of North Korea led north Korean troops across the 38th parallel, it was a bloody Sunday for the South Koreans. This war lasted until the year of 1953, finally coming to an end with the General Mark W. Clark signing the armistice “with a heavy heart.” Korean War wasn’t just a war that between the North Korea and the South Korea. There were many different influenced that led to the crossing of the 38th parallel by the North Koreans. When you break down the Korean War and see it for what it actually is, you can have a better understanding of what happened that let to the crossing of the 38th parallel on June 25, 1950. Though the actual civil war only lasted for 3 years, you have to take into account that it was the territorial fight against the other counties such as Japan, China, Soviet Union and United states that led to the civil war on the June 25, 1950. The whole war took from late 18th century to the mid 19th century. Korea basically became a target and a victim of the geographical and territorial reasons of the other countries.

Based on what we now know of the clandestine operations of the CIA and their assets and fronts. What is now known to have provoked the NKPA to attack South Korea when it did.