The Byzantine Empire, the survivor of the Roman Empire, flourished into the oldest and longest lasting empire in our history. It began with Constantine the Great’s triumph of Christianity. He then transferred his capital from Rome to the refounded Byzantium in the early 4th century, year 330 AD, and named it Constantinople after himself. This city became the surviving safe spot after the breakup of the Western Roman Empire by the 5th century. It was by far the largest and richest city in Christendom during the Middle Ages with a population of about one million people. (Encarta)

Constantine the Great had established a criterion for the empire to follow throughout its history. It included the harmony of the 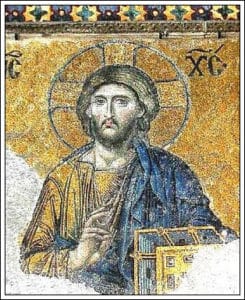 church, the leaders and the teachers of the empire. Constantine created a successful new monetary system based on the gold solidus, or nomisma which lasted well into the middle of the 11th century. Because of the commercial thriving throughout the 4th, 5th, and 6th centuries, many ancient cities flourished. Large estates dominated agriculture which continued to be fruitful in spite of the heavy taxation causing an abandonment of land. From the beginning to the end of the Byzantine Empire, the church and the emperor had been the largest landholders, therefore being the largest profiteers of Byzantine. (Encarta)

After the Roman Empire fell in 476 AD, Byzantine conquered all. It took over the space of southeastern Europe, southwestern Asia, and the northeast corner of Africa. The present day countries in these areas include the Balkan Peninsula, Syria, Jordan, Israel, and Egypt. This large empire known as Byzantine didn’t get called Byzantine until scholars named it. The people of that time were not thought of as Byzantines but as Romans who lived a Roman lifestyle. Byzantine had been started and ruled by an emperor without any formal constitution. It slowly formed a similar establishment of late Roman institutions. Byzantine followed the Romans orthodox Christianity as well. The predominant language of this era was Greek, although some subjects spoke Latin, Coptic, and Armenian. (Great Ages)

The Greek language led to a Greek culture. The Byzantine empire stood out for their Christian religion and their expression of it in their artwork. These Romans carved exquisite ivories, illuminated manuscripts, and formed mosaics out of glass and stone. Mosaics were pictures formed from these objects with the intent to stimulate profound religious thought. The mood of these mosaics was always honoring and respectful of Christianity and its components. Another form of Christian expression was in the form of icons. These were parts of the Gospel played out into visual pictures. The icons portrayed prayers, hymns, and sermons in color. These too created a reverence for worshippers to follow. That was the first goal of icons. The second goal was to form an existential link between themselves as worshippers and God. These are only a few ways that Byzantines use art as a part of their religion. (Great Ages)

Religion was a great part of the Byzantine empire. To form a bigger Christian kingdom, Christian Justinian the first attempted to bring the west and east Byzantine empires together in 527 AD Justinian became the second emperor of Byzantine at that time. Him and his wife, Theodora, set a goal to restore the former majesty. (Oxford History) They wanted to improve the intellectual quality and their geographical limits of the Roman Empire. At a great cost, they re conquered North Africa, Italy, Sicily, Sardinia, and parts of Spain. This was part of the reason the Byzantine empire fell. Justinian and Theodora, with substantial expenses, induced in fabricating public buildings and churches. One of these famous churches was the Hagia Sophia, Church of the Holy Wisdom, in Constantinople. After spending so much of the Byzantine’s money, the empire was overstrained when finally their resources ran dry. Along with that problem, plagues crossed the nation and reduced the Byzantine population. (Encarta)

To fight the rundown of the Byzantine nation, they transformed their armies into an elite expeditionary guard called tagmata and army corps labeled themes or themata. Each of these were commanded by a strategies or general who acquired civil and military authority of his army district. Thematic armies became army corps districts whose soldiers acquired tax-exempt lands, preserving the core of the empire while avoiding the incriminating drain of cash that had overstrained the salaried armies of the period before the Arab invasions. (Encarta) 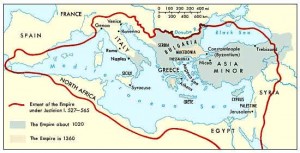 Finally, the invasions began. Byzantine was able to defend itself against Germanic and Hunnic raids in the 5th and 6th centuries. They were also able to stabilize a reasonably secure eastern frontier against the Sassanid Persian Empire but they could not recover, hold, and govern the entire Mediterranean world like they had. Warfare and the nations insecurity inhibited agriculture and education. With their limited resources, the empire could no longer maintain the full dimensions, foundation, and complexity of the late Roman Empire. It barely managed to endure and adapt to its circumstances.

Beginning in the 9th century, Byzantium experienced a major recovery that took many different forms. Many of the offensives halted on the eastern frontier. The reasons being were the decline of the caliphate and of the creativity of Byzantine strategy. In the 10th century, the lands that had been lost to the Slavs were reconquered and reorganized. As well as the recovery of old land, the recovery of learning occurred. Intellectual life was revived in many new fashions. Ancient manuscripts were summarized and recopies, encyclopedias were compiled, and mathematics, astronomy, and literature received new attention. Art and literature also 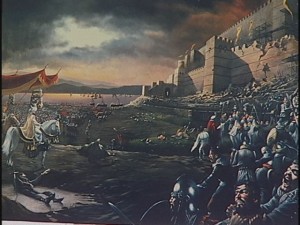 returned to the regained Byzantine.

The greatest Byzantine emperor seemed to be Basil II. He restrained a lengthy rebellion and expanded the Byzantine Empire. On the downside, he replaced the power of many older families with a new group of loyal families. This failure damaged the revenues, authority, personnel, and other military resources of the state. After his death though, the empire prospered in economic expansion but suffered from many mediocre emperors. These emperors neglected new technological, cultural, and economic developments in the western part of the empire. Meanwhile the army deteriorated. The old thematic armies had been ruined.

The fall of the Byzantine Empire had been on the decline for some time though. By 1450, only Constantinople and a few small areas to the west were left standing. The Ottomans of Turkey finally ended the Byzantine Empire. Mohammed II, the Ottoman sultan, wanted Constantinople as the capital of his empire. After eight weeks of heavy bombardment, his army of 80,000 men got in the walls of the final city standing in their way. They were surprised to be met by such a fierce opposition led by Constantine XI. Finally, when Constantine breathed his last, the Ottomans of Turkey could rejoice at the collapse of the city and the end of the empire.

The end of the Byzantine Empire showed an end to a great period in history. Their artwork and culture are still admired today. Their perseverance paid off to help them become the longest standing empire in history. Byzantium is one empire that will never be forgotten.