First of all, I liked the way that The Glass Menagerie was not specifically dated. What I mean by this, is even though the play was written in the forties, today we (people in general), can still relate to some of the issues in it. Like take for example the disability issue. Laura was so self 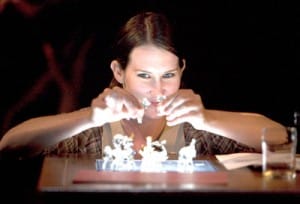 conscious of her disability, but in reality, people did not really even notice. This is how society in general treats people with disabilities today – the same as everyone else. I also liked the development of Laura’s character over the course of the plot. At first she was timid and afraid of the world. But as the play progressed, and her character grew, she started to grow out of her timidness and started to be more trustful of people. By the end of the play, she had completely opened up to Jim and even showed him her glass menagerie, her most prized possession. I think that the stage directions in this play were both useful and annoying. I say that they were useful because they helped me to understand the plot and the characters motives and actions easier and better. But they were annoying because there were so many of them, and at times Tennessee Williams was overly descriptive in his stage directions. This play made me think about how people with disabilities are treated.

I had always thought that in the thirties and forties, being disabled was not accepted. But after reading this play, I am starting to think that I might be wrong after all, because Laura seemed not to be treated any differently as a result of her disability. What surprised me about this play, was the fact that Jim was not married to Emily Meisenbach, his high school sweet heart. The way that he was presented by Laura’s memory, I thought that for sure he would be married to Emily. But on the other hand, he is engaged to Betty, so he must really be as wonderful as Laura remembers. What angered me about this play, is the fact that Jim did im fact turn out to be engaged. I guess that I was hoping that Laura would in fact end up getting together with Jim, and living “happily ever after”. But that is not how real life is, and I like the way that Williams shows us that not everything works out to be alright in the real world. I don’t like the way that Amanda kept accusing Tom of being selfish. I think that Tom is being very generous and noble by supporting Amanda and Laura. It’s not his duty to do so, but he is still doing it, regardless. He could be out in the world having fun with his money, but instead he chooses to support Amanda and Laura. I would recommend that you continue to use this play as study material for grade eleven students. I say this because this play is not dated, and it touches on some very good topics (eg. people with disabilities and how they’re treated). I also think that this should be continued to be studied, because it is really a short play, and it is straight-forward. It also gets to the point quickly, and there is less of a chance that the students will get bored of it.

READ:
Deconstruction in the Great Gatsby