This book describes difficulties of the Indians who inhabit the following countries: Bolivia, Venezuela, Colombia, Mexico, Paraguay, Panama, and Brazil. This book is a compilation of the various struggles of Indians living in these countries of Latin America. For over four centuries, these people have been taken advantage of by the Europeans who invaded their lands. Many of the customs and traditions of the Indians in Latin America have struggled for survival throughout the centuries from the problems that the whites have caused. Latin American Indians have struggled through hardships created by the whites that include a loss of lands, slavery, discrimination, a complete rearrangement of their beliefs and cultures, ethnocide, and genocide.

The Latin American Indians have struggled for centuries since the invasions of their lands to reclaim their lands, and way of life. The lands for them is not simply dirt for them to cultivate. The various Indian cultures have lived with their lands in harmony for thousands of years. The land to them is their sense of identity in which they respectfully care for and live with in harmony. The land which they once owned was meticulously cared for and the lessons which they learned of respect for nature was passed down to their children for generations. Much of the land they once owned was stolen from them when the Europeans invaded.

Another aspect which was described in this book was religion and the effects it had on the natives of Latin America. The Catholic church was forced upon many of the Indians when the European, mainly Spanish, ideologies were forced upon the Indians. The church claimed to want to help them to enrich their lives and help their communities. The new church soon forced the natives to work for many days without any pay. 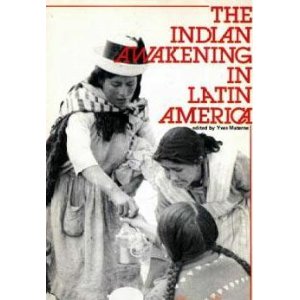 The impression of the church was forcefully imposed on them in many ways. The Europeans believed that the Indians were not equal to them. The believed the Indians did not know any better, and the religion they followed wasn’t the true one. If the Indians didn’t want to worship the Catholic religion, harm was given to them oftentimes. Religion has always been an important life to the Indians of Latin America. It has been an integral part of their life for thousands of years. Although disputes about religion have been going on since the beginning of time, the pressure which the Spanish settlers imposed on them was one which was integrated with dominance. The dominance which was imposed on the Indians of Latin Americans when the Spanish settlers arrived, stripped the Indians rights to have the freedom to choose their own religion.

The new schools and the ideologies were also forced upon the Indians when the Spanish invaded their lands. These new schools did not teach the continued traditions that are important to the cultures and the values important to the Indians. The new schools do not teach them how to continue to live in harmony with the lands that they have lived with for centuries. The history that is taught in the classrooms is of Euro-centered origin. The history that is important to the Indians is not taught in the new schools. The history that is the true history of Latin America is either ignored or changed and devalued by only being taught as a small part of history. This Euro-centered attitude of education has degraded the quality of the Indians way of life in many ways. As time passed the values and history of the native people have been slowly fading over time as the history of their people is not adequately taught or is not represented correctly. The details of the rich history of these Indians are not taught to them. The information has caused many Indians to lose touch with their true culture. Furthermore, this has aided to help divide the Indians, even within their own country. This has been another major struggle the people of Latin America face. Of the people that are trying to ban together to stop the discrimination and total dominance over them, people from different tribes are trying to combine their efforts in all areas such as government. This is a difficult task to accomplish. Their struggle is not as strong as it could be if the Indian people of Latin America continue to be divided.

What is important to the native Latin American people has been pushed aside by the European settlers. This motivation has been driven by greed. Many of the Indians are very skeptical now when the white man says that they want to assist the people. Over many years of abuse the Indians are now banning together and trying to stop these types of problems from getting worse. What has the assistance of the white man led to in Latin America in the past? They have learned and suffered through all of the problems that the Europeans have brought. The church was forced upon them in order to help them. The new schools were forced upon them in order to help them. The new type of government was forced on them in order to help them. All this aid was supposed to be for their benefit, but in reality the truth of the European motivation was mainly greed. The greed for land was the largest motivation of the Europeans. The resources of the land and the natural wealth of the areas of Latin America were the primary things which the settlers wanted to own. The vastness of the lands which are untouched and some of which are still in their unaltered state is what the white man wants to take away. The raping of these Indians has been occurring for centuries and it still continues today.

This book is a sobering account of the experiences of the Indians of Latin America who have been enduring the problems created by the white man for thousands of years. To many people, including myself, this book is an enlightening to the immense difficulties imposed on the Indians by the white man. The facts of this book and the details of the struggles of the Indians caused my heart fall out of my body. The estimations for the numbers of Indians that lived in North and South America ranged from 50,000,000 to 100,000,000 before the first white man came to the shores, and before Columbus arrived in 1492. After the arrival of Columbus, Cortes in Mexico, Pizarro an Peru, and Cabral in Brazil, the populations of North and South America dwindled to approximately 4,000,000 in 1650. Of the original population, 92-96% had been wiped out by many diseases which the Europeans brought such as smallpox and many other deadly diseases. The number had since increased back to between 20 and 30 million, still only a fraction of the original population. The book states that sometimes the Indians wish that they were a forgotten race because then, maybe their suppression and hardships they endure would be lessened by being included in the vast wealth that their countries have. Only a small fraction of the population of their countries receive this money because of the corruption which is now in place.

The Indians of Latin America now want to rightfully reclaim what is theirs. They want to end the political rule by the whites that has lasted for centuries. They want people of the world to learn and to understand the situation and sufferings they have endured so it will not continue there or anywhere else in the world. They want to be treated fairly. Many of the indians produce most of the goods of their country but only receive a fraction of the income. For example, the per capita income of the Indians of Bolivia is a mere US $50. The total per capita income for all of Bolivia is US $120. This is a prime example of some of the suppression and huge problems which exist in all of the Latin American countries. The political system is unjust. The power of the countries has been taken from the wrightful owners and used against them. It is difficult to put onto paper the magnitude of these types of problems which have occurred and continue to occur in Latin America.