Spring 1918 to the Summer there had been a massive Successful German offensive in the central part of the Western Front primarily focused at the French and British troops.

The Germans had avoided the Canadians as they feared them as perhaps the deadliest force in the war.

The Entente need the Canadian forces to push back the Germans so 100 000 are secretly moved south to the city of Amien.

Amien changes the war. The Germans had advanced too far and were unable to defend their gains. The Canadians push at the German lines and have great successes. This is fast moving warfare with tanks, planes, troops and artillery working together. The advance was not bogged down in trenches. The Canadians actually advanced too far too fast and outstripped their artillery causing heavy losses against German machine guns.

24 Km was gained and 10 000 Germans captured. Marking the biggest territorial victory of the war. The French and the Americans had also made great gains in the South of France at the same time. It cost the Canadians 12 000 casualties with 90 days until the end of the war.

The Germans retreated to the Hindenburg line the strongest defensive line on the Western Front. 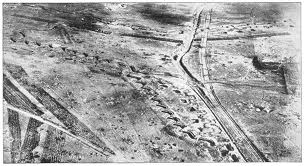 In late August from the City of Arras the Canadians are ordered to crack the Hindenburg line and take Cambrai. Again the Canadian advance was so fast that they outstripped their artillery. The second Canadian division was wiped out during this advance, however, the other Canadian forces punched through and spread out in late September.

READ:
How Canada Benefits from Globalization

This is where Canada gained a reputation as great liberators, Viva Canadian

By late October most of France and the Belgian coast was freed.

As the advance continued refugees slowed its progress. Also those people who had been under German occupation for 4 years enacted brutal revenge on any German they could find. Canadians actually started needing to protect German POW’s.

Everyone now knew the war would soon be over, Germans were negotiating an armistice.

In 1914 the first defeat the Entente suffered was at the Belgian city of Mons.

On Nov 10th 1918 the Canadians are ordered to take Mons as the last victory of the Great war.