Titanic was the largest ship in the world, built by a workforce of 17,000. The ultimate in turn-of-the-century design and technology. First-class 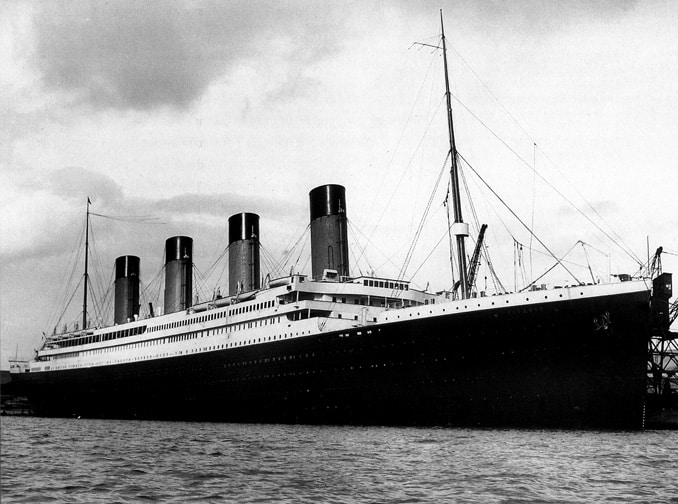 suites ran to more than $ 55,000 in today’s dollars, and when she sailed on her maiden voyage from Southampton, England on route to NY , she held among her 2,227 passengers. The cream of industrial society, including Colonel John Jacob Astor. Macy’s founder; U.S. congressman Isidor Straus and Thomas Andrews, the ships builder. The ship was built of easily sealed-off compartments. If, for some unimaginable reason, the hull were punctured, only the compartment actually ruptured would flood. In an worst case example – builders figured that the Titanic would take from one to three days to sink, time for nearby ships to help, because there was only 16 lifeboats. Unfortunately, things didn’t  work out that way. On April 14th, 1912 at about 7:30, at the first ominous hint of disaster has came. Into the earphones of the wireless operator on duty came a message from the steamer California: Three large bergs five miles southward from us. But the Titanic continued to rush through the deepening darkness. The temperature was one degree above freezing. When lookouts Frederick Fleet and Reginald Lee had come on duty at 10 P.M., the sky was cloudless and the air clear.

At around 11:30 P.M., just half an hour before they were to be rewired, a slight haze had appeared, directly ahead. And about two points on either side. Suddenly – his training causing his reflexes to function instinctively. Fleet gave the warning bell and immediately reached across the crowns nest to the bridges telephone. In its compartment on the starboard side. He rang ms bell urgently. Fleet replaced the telephone and gripped the crowns nest rail. At 11:40 P.M., April 14 , 1912 ; The lookouts spotted the iceberg a quarter-mile ahead. Had they not alerted the bridge, the ship would not have attempted a turn. At 11:40P.M. ; The ship sideswipes the ice. Because of the steels ductility, it would have absorbed massive amounts of energy. The ice crashed right through the plating as it grinded along the side, Sinking at an angle like s 300-foot zipper. ON midnight, April 14-15; fist six compartments were filling; water was beginning to slosh over. 12:40.; water filled 2,000 bathtubs 1:20 A.M.; The bow dipped; water flooded through anchor – chain holes. At 2:10 A.M.; The Titanic titled to 45 degrees or more and stress reaches nearby 15 tons per square inch. The keel bends; The bottom plating buckles. At 2:15 A.M.; The stern grew heavier and until it reached some 16,000 tons of in – water weight . At 2:20 A.M.; The bow rips went loose. The stern rose sharply, held and almost vertical position and then, as it filled, faded downward again. At least one life boat passenger said, look – its coming back!. At 2:30 A.M.; The bow stroke the bottom, 12,612 feet down, angling downward and flowing into the mud. Shortly after 2:30 A.M. ships time a green flare was sighed suddenly, for ahead. In a few seconds it disappeared. At 3 A.M., Roston ordered rockets fired at fifteen-minute intervals to let survivors know help was approaching. The company’s night signals were also displayed. By 3:35 Carpathia was almost to the position where Titanic, if afloat, would be seen. But there 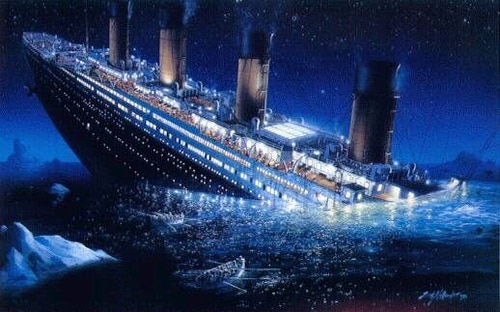 was only a safety emptiness. Carpathia inched forward. The lifeboat was alongside. Some 2,340 passengers and crew were on board the Titanic when the white star liner left Southampton for its maiden voyage to NY five days ago. And some 1,595 people perished in the accident. Only 745 were saved. Many more could have been rescued but there were enough lifeboats for only half the passengers and crew. Two boats full of people who had escaped from the ship were sucked beneath the ocean. Most of the passengers were apparently not aware of the accident when it happened. At first, passengers were so unconcerned that they remained in their staterooms to dress for dinner. By 1:30 A.M. panic has begun among some of the passengers. In the tomb that was once a ship, all that remain are China teacups and brass latches, porcelain toilets, and perhaps teeth – nearby all else has been devoured: wooden decks, the rich Victorian woodwork, human beings and their clothing – all except for shoes protected from scavengers by their tannin. Some 150 items retrieved by the French sub Nautili went on display at London’s National Maritime Museum in Oct. 1994. Protected too is the ships steel. The first memorials to Titanic’s victims were the church services in commemoration of the dead and Thanksgiving for the living. As the days passed the enormity of the loss of life became evident, and relief programmers were established. The event becomes dim in the minds of new but the monuments stand, and assurance that – as long as tides flow, as long as people sail – the memory of Titanic’s courageous and gallant men and women will never fade. It is through the appalling tragedy that befell her during her owe voyage that the world best knows of her today. Perhaps History’s most famous ship, she is remembered through memories and motion pictures; through songs and scraps of yellowing newspapers; through reminiscences of her survivors as recurring anniversary observances as, fortunately she of remembered through pictures.