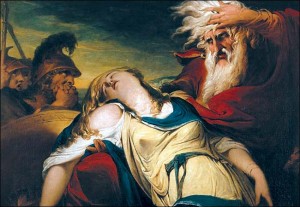 answer to the problem of good and evil. It is possible to isolate passages, each of which seems to provide an answer.

Kent, placed in the stocks at the order of the cruel Duke of Cornwall, exclaims: “Fortune, good-night! Smile once more; turn thy wheel!” (II, ii 180). Later in the play, referring to the evil sisters in contrast to the virtuous Cordelia, he states:

It is the stars,
The stars above us, govern our conditions,
Else one self make and make could not beget
Such different issues.

In both instances, Kent seems to find in chance, or blind fate, the answer to the problem of evil. It could be argued that he accepts the medieval view of tragedy, according to which, in an unstable world, good and evil alike are subject to the whims of fortune. Or, to introduce a related idea, Kent seems to embrace astrological determinism and implies that nature itself makes things good and evil. Free choice and human responsibility have no place in such a philosophy.

In contrast, Lear driven out into the storm by his own wicked daughters, asks: “Is there any cause in nature that makes these hard hearts?” (III iv 81-82). This question may imply that evil in the world remains an unsolvable mystery. Very near the end of the play, the old king enters with the dead Cordelia in his arms. “No, no no life!” he exclaims and then asks the devastating question which points to the universe devoid of saving grace and justice: “Why should a dog, a horse, a rat have life/And thou no breath at all?” (V.iii 305-7). Lines spoken by blinded Gloucester earlier in the play have been accepted by some critics as the answer to Lear’s question:

But there are other passages which point to a moral universe and to beneficent higher powers concerned with man’s destiny. Albany, appalled at the spectacle of evil following the blinding of Gloucester, voices what amounts to a prayer that there are heavenly spirits, visible ones, to “tame these wild offenses”. (IV ii 46ff). And after Gloucester has survived the imaginative at Dover, his devoted son Edgar says to him:

Think that the dearest gods, who made them honours
of men’s impossibilities have preserved the…

When Edgar identifies himself to his mortally wounded half brother, he says:

My name is Edgar, and they father’s son.
The gods are just, and of our pleasant vies
Make instruments to plague us.
The dark and vicious place where thee he got
Cost him his eyes.

To which Edmund, herefore depicted as the last one to endorse the concept of poetic justice, replies:

After enduring almost incredible suffering, physical and mental, Lear is at last united with Cordelia the very embodiment of love; following the curative sleep, his reason is restored. But immediately after his reconciliation and healing, we are confronted with the death of Cordelia and then of Lear. To be sure, the fates of the grossly evil Cornwall, General and Regan are (as Albany foresaw) the monstrous preying of humanity on itself. And Gloucester’s illegitimate son Edmund is killed by the virtuous Edgar. The wicked are indeed punished. But why the repentant Lear, the once wilful king who had learned at great cost the lesson of humility and how to distinguish appearances from reality should be made to endure the loss of Cordelia and to die in an excess of passion poses the greatest of critical problems.

Dowden (1875) Stoic interpretation of the play – emphasis heroism and dignity of man:

The ethics of the play of King Lear are stoical ethics. Shakespeare’s fidelity to the fact will allow him to deny no pain or calamity that befalls man…. He admits the suffering, the weakness of humanity but he declares that in the inner law there is a constraining power stronger than a silken thread; in the rapture of love and sacrifice, there is a charm which is neither air nor words, but, indeed, potent enough to endure pain and make calamity acceptable.

Dowden pointed out that Shakespeare’s intention is not to teach any moral truth, but rather to present “a vision of life and of the enveloping forces of nature”. He adds “each of the principle personages of the play is brought into the presence of mysterious powers which dominate life and preside over human destiny; and each, according to his character, is made to offer an interpretation of the great riddle. Of these interpretations, none is adequate to account for all the facts”.

Christian Interpretation – for critics who hold this view, the play is purgatorial and the hero dies “of peace” with his condition. Ribner: King Lear asserts the perfection of God’s harmonious order and the inevitable triumph of justice, with the forces of evil preying upon and destroying themselves. In the process they subvert the good, but finally good must be victorious.