Throughout history there has been numerous religions and theologies that men and women have entrusted their lives and ways of living to. One of the most intriguing is that of Buddhism.

The great Buddha referred to his way as the middle way, and he, as the “Enlightened One” began the teachings of the religion with his 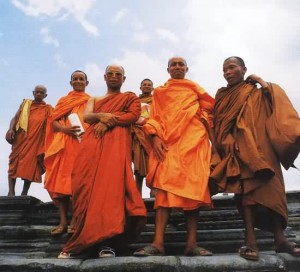 first five Ascetics who he shows his middle way. This great occasion is the start to what will be known as Theravadan Buddhism. Although Theravadan Buddhism would later be seen as the “small vehicle,” it provides the first idea of the doctrine anatman or having no-self that shapes the ideas of every Buddhist today.

Theravadan Buddhism which means “The teaching of the elders,” is the teaching of the Buddha in its true traditional form. After attaining enlightenment under the Bohdi tree, the Buddha returns to five ascetic monks he had been associated with previously. He taught them the essential parts of Buddhism which include the vital Four Noble Truths. These teachings were taught by monks, and they give the fundamental truths on which the religion was founded. These are the Four Noble Truths: (1) all life is inevitably filled with sorrow; (2) sorrow is directly due to craving; (3) sorrow can only be stopped by stopping the craving; and (4) this can be done only by disciplined and moral conduct with meditation led by the Buddhist monk. These truths show that the Buddhists saw all things as transient, and being transient there is no eternal Self or soul, hence anatman or no true self.

While the Theravadan Buddhist practiced the idea of anatman, there were other movements that practiced the idea of atman or true self. The Upanishadic movement, which started about 300 years before the Theravadan practice, revolves around a story of a boy who Yama tells there is a self in everyone. This true self or atman is covered up by the illusion of an individual. As this way of thinking was being taught, people began to uprise and question if religion is worth it. This leads to many ascetic movements in which people leave their homes to be scavengers. Because this could be done by any it began to get very popular. The many ascetic movements gave rise to many different individual movements, but the main one besides Buddhism was Jainism. Jainism was a movement that said in everything there is a Jiva or soul which resembles the atman. Karma is the stuff or gunk that covers up the Jivas and makes things appear to be different. Even though a monk was the only one who could totally free Jivas, lay people could do good deeds and suffer willingly to dissipate karma from their atman. In this movement the final step for a monk to reach Nirvana was the starving to death of one’s self. In a complete contrast to the teachings of the Jainic movement the Theravadan Buddhists saw there being no atman at all. Buddhists accepted the teaching of the doctrine of karma which causes all who have it to be reborn into a state of life according to the built up karma. The only way to stop this rebirth is to achieve Nirvana. The state of non-existence or annihilation. They also felt that when passing from one existence to another no permanent entity or atman transmigrated from body to body. The reason for there being no self is because self cannot be found in the five basic aggregates or Skandhas. These being matter, feeling, perception, constructing activities, and consciousness were all made up of dharma or small atomic units. This seems to be contradictory because if there is no self then these dharma shouldn’t be present because they would in a sense create a self, even if they just came in and left every second.

The Theravadan Buddhists were very particular in what they practiced and what they worshipped. They were never found praising idols or human images, rather they took to praising the Bodhi trees, footprints, and stupas or burial mounds. Their worship centered around the continuous life and rebirth into one of the five levels of society. These were heavenly devas, humans, animals and plants, praeta, and hell beings. All of ones karma that he or she accumulates in their life determines the level they are reborn into. This is all tied into the seeing of existence as Dukka and the goal is to get out of Dukka into Nirvana.

In almost a total contrast to the Theravadan way of thinking is the much earlier teaching of the Vedic religion of the Aryan people. According to Vedic thought, Brahman or the atman is a passenger of a chariot. The chariot is the body and the driver of the chariot is the mind which the atman is trying to escape from. In their religion there are numerous gods like Indra the god of war and Agni the god of fire. There are eventually four classes structured from the body of Purusa, these are Brahmans, Kshatriyas, Vaishyas, and Shudras. While people liked the idea of having gods watching over them, the fact that the Brahman class began to gain a monopoly on maintaining cosmic order and power made many uneasy. People begin to see the earth as a trap, and they doubt the greatness of Heaven and the oneness, unchanging unity in the world. From this is a rise to the Upanishads. These are speculative elaborations of the Vedas.

While each of these movements has a very distinct meaning to it and path to follow, I feel that all of these ways of life are flawed. In most of the religions only the higher classes can reach the supreme way of life. The regular people are stuck, and they can only help the monks or Brahmans to attain their goal. This seems very unfair even if they are producing good karma. In the Vedic religion the Shudras don’t even have the option of studying the holy text. They have no chance of gaining entrance to another level of being until their next life. Theravadan belief of the being no true self is all together mind boggling. If there was no self then how can karma pass from one existence to another. It can’t.

Each period in time has new ways of thinking and viewing the world. India has been a place of many movements in the field of religion. These early ideas and practices of Theravadan monks can be seen as one of the many religious ideas of the past, that has in some places lasted to the present day. As is the case with all religion, it will be subject to scrutiny, questioning, and slander. While many may not see the Theravadan way of anatman as being right or even sane, it is their way of life and they should be respected for it.