On November 4, 1979, several hundred Iranian students and other demonstrators took possession of the US embassy in Tehran by force, in protest at the admission of the deposed Shah of Iran into the United States for medical treatment.  The demonstrators were not opposed by the Iranian security forces.  US consulates elsewhere in Iran were similarly occupied.  The demonstrators, who had seized archives and documents, were still in occupation when this case was decided, holding 52 US nationals as hostages.  The United States asked the International Court of Justice for a declaration calling for the release of the hostages, evacuation of the embassy and consulates, punishment of the persons responsible, and payment of reparations. 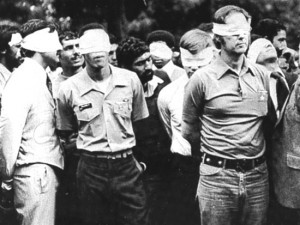 embassy by militants, when they executed their attack on the embassy, had any form of official status as recognized “agents” of the Iranian state.  Their conduct in mounting the attack–overrunning the embassy and seizing its inmates as hostages—could not, therefore, be regarded as an act of the Iranian government.  The militants’ conduct might be viewed in this way only if it were established that they had acted on behalf of the state, having been directed by some Iranian government authority to carry out a specific operation.  The court found no credible evidence of such a link.

READ:
Divorce in the United States

However, this finding did not, in the court’s view, absolve Iran of responsibility for the attacks.  Under the Vienna Conventions of 1961 and 1963, and also under general international law, Iran was required to take appropriate steps to ensure the protection of the United States’ embassy and consulates, their staffs, their archives, their means of communication, and the freedom of movement of their staffs.  Iran failed to do this.

The second phase of the claim related to events that followed the occupation of the US embassy by the militants and the seizure of the consulates at Tabriz and Shiraz.  Once the occupation had taken place, the Iranian government was required to take every appropriate step to bring it to a speedy end, to restore the consulates at Tabriz and Shiraz to US control, and in general to restore order and offer reparations for the damage.  No such steps were taken.

For these reasons, the court decided by majority vote that the Islamic Republic of Iran violated obligations owed by it to the United States of America under international conventions in force between the two countries, as well as under long-established rules of general international law.

I am against these tax cuts that the Canadian government is giving to the corporatocracy. They need to pay their fair share of what it takes to make a society work. Roads, Schools, hospitals, public utilities and the cost of raising the next generation of workers. I would not allow them to sell one product in the country if this is how they want to operate. Patriotism it seems is a sucker’s game used con our youth to serve as cannon fodder abroad or prisoners at home-all in the service of capitalism. Competition is NOT what has allowed us to… Read more »

I would like to exchange links with your site schoolworkhelper.net
Is this possible?