Lyndon Johnson led the country for five years (1963-1968) after President John Fitzgerald Kennedy died of gunshot wounds on November 22, 1963. He formulated many policies and carried out many others that Kennedy could not finish. He faced many foreign problems as well, including the Vietnam War and the Cold War. How he dealt with foreign problems put him near last if not last in foreign affairs, when compared to other presidents. Johnson always talked to tourists and met reporters informally. He entertained many distinguished guests at his ranch in Texas. Also, Lyndon and his wife Claudia (Lady Bird) Johnson held formal and informal dances at the white house. His presidency left added a lot in the history books. If it were not for his leadership and ideas, many parts of society today would not exist.(Peter Lisagor, 148-152)

“We have suffered a loss that cannot be weighed. For me, it is a deep personal tragedy. I know that the world shares the sorrow that Mrs. Kennedy and her family bear. I will do my best. That is all I can do. I ask for your help and God’s,” quoted Lyndon Johnson after the assassination of friend, colleague, and leader President John Fitzgerald Kennedy at one-o’clock on November 22, 1963(Peter Lisagor, 151). Johnson took on the large role as president aboard the presidential Air Force jet at Love Field, Dallas exactly ninety-nine minutes after Kennedy died. Coincidentally becoming the second vice president with the last name Johnson to succeed an assassinated president and nearly one hundred years apart.(Hugh S. Sidey, 1-2 & Hans L. Trefousse, 1-2)

Within a short time after he became president, Johnson announced a five hundred million-dollar budget cut and urged a strong civil rights bill. Both of these were previously proposed by Kennedy. Also, he proposed a national War on Poverty. This included creating new jobs and building up areas where the economy had faltered. This was approved by Congress without a problem. A new housing law provided five billion dollars in federal funds to help the needy buy houses and rent apartments passed in 1968. Congress also passed a tax cut for both individuals and corporations. (Peter Lisagor, 148-149) Civil rights was a large part of Johnson’s presidency. It did not take him long to develop civil rights laws. A new civil rights law opened to Negroes all hotels, motels, restaurants, and other businesses that serve the public. It guaranteed equal job opportunities for all people. Also, Congress passed a voting rights law that ensured voting rights for Negroes and outlawed literacy tests as a voting requirement. The Civil Rights Act of 1968 ended racial discrimination in the sale or rental of houses and apartments. To add the civil rights developments by Johnson, he appointed the first Negro cabinet member and first Negro Supreme Court judge. Robert C. Weaver was selected to be the secretary of housing and urban development. (Peter Lisagor, 149- 151) Thurgood Marshall was set as the first Negro Supreme Court justice(Robert S. Summers, 2).

The Railroad Crisis, in April of 1964, plunged Johnson into one of America’s toughest labor disputes. After years of disputing between union 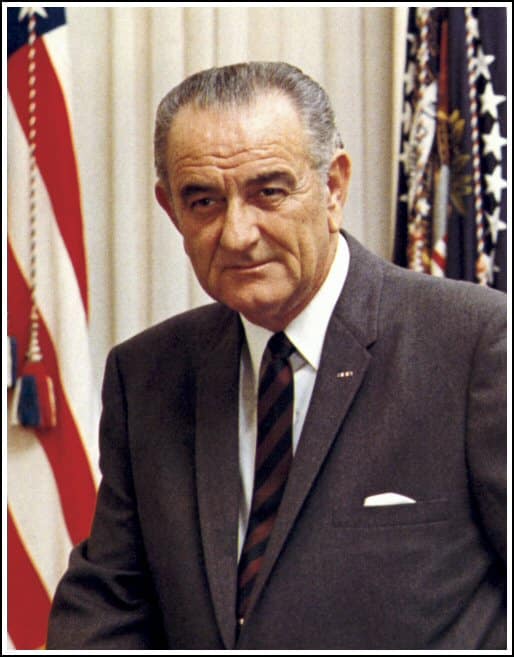 workers and train companies over work rules the companies announced new rules that resulted in a union strike. Johnson arranged a fifteen-day delay of the strike and put company and union leaders in a White House room and under pressure from Johnson the dispute was settled in only twelve days.(Peter Lisagor, 149)During his first full term he used even more policies and passed even more laws. In May 1964 Johnson stated “. . . we have the opportunity to move not only toward the rich society, but upward to the Great Society.” The term Great Society was used to describe many of his domestic programs. Congress passed his Appalachia bill which improved the living standards in the Appalachian Mountain region. It also passed his proposals for increased federal aid to education, a cut in excise taxes, stronger automobile safety measures, and the establishment of the Department of Housing and Urban Development and the Department of Transportation. Lyndon Johnson also succeeded in passing his Medicare plan.(Peter Lisagor, 150) Johnson inherited many of the foreign affairs problems concerning the United States. A Cold War with Russia and other Communist countries kept the world in continual danger of a nuclear war. This problem has been around for some of Kennedy’s term. The first real crisis in foreign affairs for Johnson was in early 1964 when anti-U.S. riots broke out in the Canal Zone. The tension eased after Johnson agreed with Panama’s president to discuss outstanding problems.(Peter Lisagor, 149) Johnson stated soon after becoming president, “This nation will keep its commitments from South Vietnam to West Berlin. We will be unceasing in the search for peace; resourceful in our pursuit of areas of agreement even with those with whom we differ; and generous and loyal to those who join with us in common cause.”(Peter Lisagor, 149) The United States continued its technical and financial assistance to South Vietnam. In August 1964, North Vietnam torpedo boats attacked U.S. Navy destroyers in the Gulf of Yonkin. Johnson ordered U.S. planes to bomb North Vietnam’s torpedo boat bases. In the spring and summer of 1965, he ordered the first U.S. combat troops into South Vietnam to protect American bases there and to stop the Communists from overrunning the country. America stepped up the bombing of North Vietnam. Casualties and the cost of the war increased sporadically. By 1968 the United States had more than five hundred million troops in South Vietnam. A bitter debate in the U.S. developed which separated the country into hawks (those who supported military action) and doves (those who called for the cutback of United States involvement in Vietnam and eventual withdrawal). The two chief critics of the war were Eugene McCarthy and Robert F. Kennedy.

Opposition to this country’s increasing role in Vietnam increased. Demonstrations took place throughout the nation and riots broke out in Chicago, Cleveland, Detroit, Los Angeles, New York City, and Newark that were against the U.S.’s involvement in Vietnam. Many people began to doubt statements by the administration on progress of the war. Soon Johnson’s popularity dropped because of his drop in credibility. He rejected any chance of reelection as he announced the reduction of bombing in Vietnam. The beginning of peace talks with North Vietnam representatives stated on May 13, 1968. The United States bombing on Vietnam was halted on November 1, 1968. Peace between the U.S. and all of Vietnam soon followed.(Peter Lisagor, 149-152)

To conclude, President Lyndon Johnson deserved his rank. After all his great accomplishment in civil rights and his war on poverty he could have been near the top of the list. Unfortunately everything started to collapse near the end mainly because of his involvements with Vietnam. His many achievements left a mark in history. If it were not for him, many civil rights would not exist. He added on two whole cabinet departments and appointed two of the first Negro government officials. These accomplishments kept him high on the list. Many people would consider him last in foreign affairs because the people of the country did not always agree with his involvements in Vietnam. This most likely brought his rating down.