The world is full of interesting things, none the least of them are plants, they have developed many different ways to grow, cope, survive and flourish in almost every environment on earth. From water retention to parasitic growth, symbiosis to carnivorous behavior, plants are the supreme adaptors. This report is comparing two very interesting and almost opposite plants, the Venus fly trap and the saguaro cactus.

The biggest difference between these two plants is their respective environments. the Venus fly trap grows in warm, wet, boggy areas with rather acidic soil while the saguaro grows best in dry desert environments with much less water by comparison. However the respective ranges of these particular plants is quite small, with the Venus fly trap being limited to the Carolinas and the saguaro centered on southern Arizona and part of Mexico. Both plants are sensitive to their environments, with the saguaro being the hardier of the two. It can survive frosts and drought but nothing extreme. Conversely the fly trap cannot survive a frost and will wither without water. An interesting fact about the fly trap is that it does not survive well with the addition of fertilizer to its soil; it tends to wither and die.

Another major difference between these two is there sizes. The Venus fly trap is very small, about the size of an overgrown weed (13cm in diameter), while the saguaro cactus can grow to an astounding 50 feet tall and weigh up to seven tones, and in particularly wet seasons up to 90% of its weight is water. This amazing ability to store water comes from its unique design in which folded skin can expand to make room for large amounts of water. The waxy cuticle prevents the loss of excess moisture and enables this plant to endure droughts. The cactus has between 13 and 20 ribs, much like the ribs on a wooden boat, which give it its size and shape. The fly trap has many specialized leaves on its body called “Traps” these traps are what are used to catch insects and other prey, which will be discussed later. The fact that the fly trap has leaves is yet another major difference between the two, since the cactus does not have leaves.

Contrary to popular belief the Venus fly trap does in fact photosynthesize. Most people are under the impression that a fly trap obtains all its nutrients from the things it eats and, for example, if you where to leave a fly trap in a dark room filled with bugs it would survive, this is false, Paul Mahoney, PhD). The fly trap uses the creatures it consumes as a source of nitrogen, since the soil in which it lives is very acidic. In addition, boggy areas are rich in insect life which, through selective pressures, has resulted in a carnivourous trait to obtain missing nutrients. The saguaro cactus has developed a much different method of obtaining nutrients. It is a CAM plant, which means that instead of absorbing CO2 during the day and proceeding with photosynthesis, it instead absorbs it at night to retain water and converts it into malate, an acid. Then during the day the malate is converted back into CO2 and photosynthesis takes place. The cactus can also do what is called “CAM-idle” which is an exceptional way to survive a drought. The cactus simply shuts its stomata all the time and survives by means of cellular respiration and photosynthesis, but recycles all the gases it uses and thereby retains huge amounts of water.

The methods of reproduction on these two plants are quite similar, if not identical. Both flower when they become mature, both can either be self 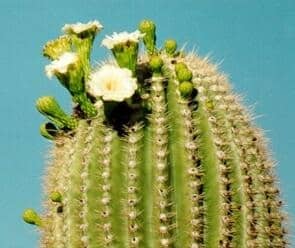 pollinated or have an outside force do it (insects, birds). Both grow a sort of fruit. However there are differences. The fly trap not only can reproduce sexually but also produces runners, much like strawberry plants. These runners can be cut off and form new plants with identical genes. The saguaro survives best when it grows near the base of another saguaro, since the adult cactus provides a richer soil than the arid desert. Both plant seedlings grow slowly with the cactus comparititivly slower, it can take up to 30 years to grow two feet taller. The fly trap takes around six years to reach its full size, depending on conditions.

Although these plants grow in starkly different environments, have differing methods of nutritional gain, and are in general different, they are prime examples of evolutionary adaptation. The unique adaptations that these plants have developped are truly astounding and unique, from gathering nutrients from bugs that it consumes to becoming self sustaining under extreme droughts, both these plants are truly amazing.

I had a project and this helped! 🙂