A Nightmare on Elm Street was written and directed by Wes Craven. The movie was released in 1984 and challenged the typical slasher genre film of the time in many aspects. The movie begins with the haunting children’s song, “One, two Freddy’s coming for you /Three, four, better lock your door / Five, six grab your crucifix / Seven,eight gonna stay up late / Nine, ten never sleep again.” A teenage girl wanders around a dark boiler room in only her nightgown, as a screeching is heard as knives are scratched against the pipes.

A badly burned man wearing a dirty hat and striped sweater with knives for finger grabs her from behind and she then wakes up screaming in her bed, it was only a dream. Not long after this, the same girl is in another dream where she is being chased by the same man, he catches her in the dream and in reality she is thrown around the room in a state of unconsciousness and stabbed repeatedly by an attacker that can only be seen in her dream. The film is already different from the typical slasher/stalker film in that the terror is taking place in both the dream state, as well as in reality. The basic plot resembles other slasher films in that a scary, strange entity is stalking teens in order to kill them. The setting is dark and spooky with a foggy appearance. As in many horror films a character who is thought to be one of the main characters is killed off early on and that is where the similarities end. The plot of this film gives a reason as to why Fred Krueger is after these teenagers. The parents of these teens who live on Elm Street had gotten together, captured him and burned him alive because he had gotten out of jail, charged with 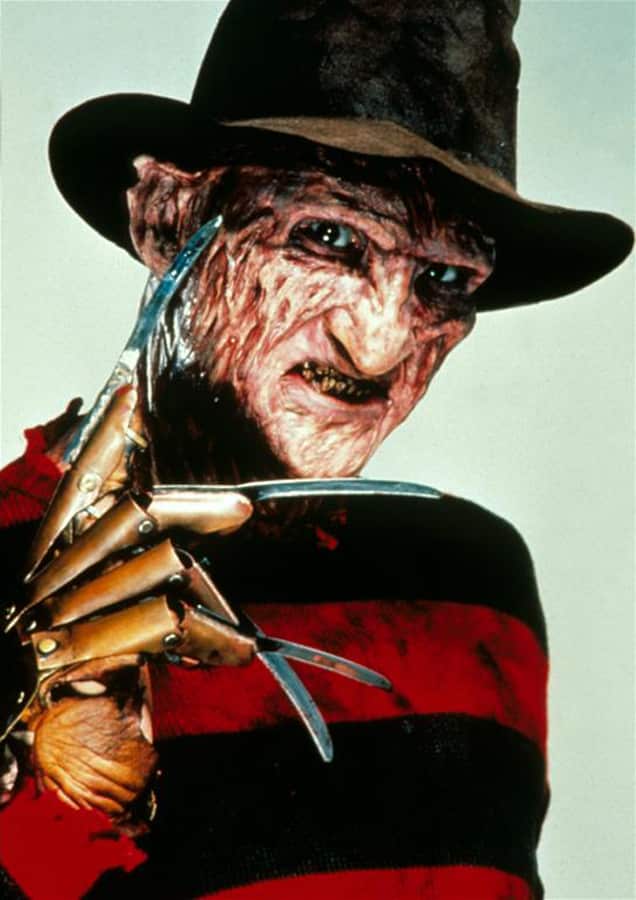 murdering children, on a technicality. Now as his revenge he must kill the children of all the parents that were involved in his murder, by stalking them in their dreams. By making Freddy Krueger the result of a dark secret in the neighborhood, the motivation is much deeper than the average slasher film. Although Freddy is a horrible villain, his crimes existed in the past. The teenagers parents are now responsible for the reawakening of the terror because they committed an act just as horrible and as a result, their children must now pay for their sins. The nightmare world is connected to reality, which effects the visual style of the film. This allows for anything to happen, there are no limitations. While other villains are restricted to real world laws of physics, Freddy Krueger can do anything when looking for people in their dreams. There are no physical limitations to what he can do. This also allows the filmmakers to do things in terms of effects that had not been done before, such as when Freddy pushes through the wall and knocks the crucifix over Tina’s bed onto the floor. Weaving the reality sequences with the dream sequences so that the audience did not know which was which also had an impact on the visual style of the film. Some of the dreams appeared so realistic that when it was cut to reality or switched back into a nightmare it added even more surprise to the where the story was.
The characters in this film are also very different from the typical characters in a slasher horror film. These characters have personalities and are intelligent. Nancy ,the female lead character, is a particularly strong character in the film. She is not about to let herself be killed by Freddy. She fights back by trying to stay awake drinking coffee and taking caffeine pills. She also discovers ways to go into the dream state and learn about it without being killed. She even manages to find a possible way to bring Freddy into reality from a dream and sets him up to be killed. Nancy redefines the role of a victim in this genre of film. She does not just run from the attacker to get away, nor does she try and hide from him. Rather she goes right into the killers world announces that she’s there by screaming out “Krueger, I’m here”, captures him herself by going after him, fights back and destroys Krueger for the time being by not fearing him and standing up to him. Freddy Krueger also redefines the typical role of a killer in this film. The typical stalker was one that never spoke, was unimaginative, and vicious, that captured their victim by chasing them down to a dead end. While Krueger is scary and dangerous, it is his wit and intelligence that really come through. He has a brain and knows how to use it, he uses all the tricks of the trade to lure his victims to him and is very cunning while he does it. He uses sarcasm and plays with the minds of the victims, for example when Krueger transforms himself into a high school girl hall monitor and asks Nancy where her hall pass is. This is not the typical image one would have of a killer but this lets the audience know that he is lurking about just waiting to make his move.
The film also deals with certain thematic concerns, such as the role of parents and the police in society. The parents in this movie are not interested in what their children are telling them. Nancy’s mother, who is an alcoholic, won’t believe her when Nancy tells her about Freddy. Nancy’s father, a police officer, doesn’t show up to help Nancy when she brings Freddy out of her dream into reality, even though he said he would be there. Nancy believes that something might happen to Rod while he is in jail and she asks the police to check on him. The police don’t check up on Rod and he is murdered in his cell by Krueger. The parents feel that there is no problem because they think that they solved the problem by killing Krueger themselves. The parents won’t listen to their kids, which is a common theme in many movies.
A Nightmare on Elm Street adds to the horror genre, by bringing into light the psychological aspect of horror, which can be much scarier than blood and gore. It brought a new perspective to the typical horror movie and allowed for serious character development. Therefore, it became possible to battle the killer, it became an issue of the mind, not over who was bigger or stronger. The movie gave motives for the plot and made it interesting and intelligent It also made a connection between what society fears and the reality of those fears.
In an time when the horror film had become little more than a mindless game of cat and mouse, with excessive amounts of blood and gore, Wes Craven brought hope to the genre. A Nightmare on Elm Street intelligently probed into the audience’s fear of nightmares and combines that with the fear of being trapped within a nightmare in order to create a very intelligent thought-provoking movie that helped to redefine the horror genre.

Bibliography
Brown, Gene. Movie Time, A Chronology of Hollywood and the Movie Industry from Its Beginnings to the Present. Macmillan Company, 1995.
Mast, Gerald and Bruce Kawin. A Short History of the Movies, Seventh Edition, Allyn and Bacon, 2000.
Kawin, Bruce. How Movies Work, University of California Press, 1992