Who are the Pashtun? 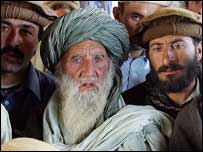 The Pashtun language, Pashto, has two main dialects – Kandahari Pashto and Peshwari Pashto.  Pashtuns are generally strict in their observance of the Islamic custom of purdah – the seclusion and veiling of women and women are usually restricted to the home.

The Taliban, an Islamic fundamentalist movement dominated by Pashtuns, took over the capital of Kabul in 1996 and soon controlled most of the country.  Opposing forces were formed by the Tajiks, Uzbeks and Harazas in what is known as the Northern Alliance to fight against the Taliban regime.  The Taliban were driven from power in late 2001, during the United States led war on terrorism.

READ:
Who are the Hazara?

Historically, the Hazaras were the most oppressed ethnic group in Afghanistan.  Ironically, the Pashtuns who were historically a ruling group, now undergo ‘reverse discrimination’ and are ‘guilty by ethnicity’ as result of being associated to the Taliban.