He led a very active outdoor lifestyle that is reflected in most of his paintings.  At the age of 19 he began to pursue his artist career by becoming 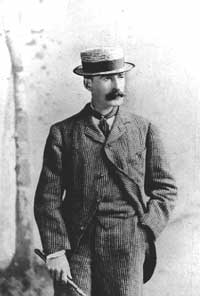 an apprentice in the Boston Lithographic firm of J.H. Bufford.  His only form of training was at local art classes where he learned the basic principles and styles of art.  He also studied under Fredrick Rondel a well-known painter in Boston.  Homer worked at Bufford’s for 3 years and then left because “Harper’s Weekly”, the best magazine of its time, wanted homer to work for them.  Homer quickly became their leading illustrator and main artist.  During the Civil war, he drew a great number of scenes from the war for the front cover.  These drawings later inspired him to paint such works as Prisoner’s from the Front, one of his most famous paintings.  This is a painting of men going to war during the civil war.  Many people were overwhelmed with his great ability to capture the civil war scenes with such great detail, and consider them some of the most powerful and authentic records of union troop experience.  Homer also submitted paintings to the National Academy of Design and was elected a full academician, which is an outstanding achievement given to artists for their great artwork.  This sparked his need to travel and explore.  So homer went to France to study art.  Here he visited many exhibits of the leading artist, such as controversial art by Edourd Manet and realistic art by Gustave Courbet.  Upon returning to the states, homer settled in New York, where he produced many of his great works.  He began to explore many subjects, such as rural life, recreational activities, and childhood themes using nationalistic techniques.  He produced genre paintings of his nationalistic concerns and post-war nostalgia.  One of his more famous paintings is Snap the Whip.  This is a painting of young boys playing in a field.  He worked with this style up until the 1870’s, when he began experimenting with watercolors.  While working with watercolors, homer began his focus on painting images of former slaves and exploring the theme of man versus nature.

One of his key paintings of this time is Fog Warning.  It shows a man at sea fishing and looking to the sky for a storm approaching.  The waves are crashing and the man looks to be worried.  This painting was a transition of his early genre paintings to more serious themes, such as local folk fishing and the sea.  For this painting he hire a local fisherman to pose in a dory beached on a sand dune.  This enabled him to reproduce accurately the angle of the boat buoyed up by the swelling waves.  Homer originally called this painting Halibut Fishing, conceiving it as a pendant to the Herring Net; both works are naturalistic representations of the arduous work of the fisherman and the chilling majesty of the sea.  But before exhibiting it in 1885 Homer changed the title to attract attention to the impending danger of the oncoming fog.  In 1883, Winslow Homer moved to Prout’s Neck, Maine, and proceeded to create a series of images of the sea unparalleled in American art. Long inspired by the subject, Homer had spent summers visiting New England fishing villages during the 1870s and, in 1881, he made a trip to a fishing community in Tynemouth, England, that fundamentally changed his work and life. His late paintings focused almost exclusively on mankind’s age-old contest with nature. Here in The Herring Net, Homer depicted the heroic efforts of fishermen at their daily work, hauling in an abundant catch of herring. In a small dory, two figures loom large against the mist on the horizon, through which the sails of the mother schooners are dimly visible. While one fisherman hauls in the netted and glistening herring, the other, a boy, unloads the catch. With teamwork so necessary for survival, both strive to steady the precarious boat as it rides the incoming swells. Unlike most of his paintings which show moments of great dramatic force and emotional tension. Eight Bells depicts an everyday occurrence.  The sound of eight bells rung 6 times a day at 4, 8, and 12.  Signals that it is noon, and 2 sailors, presumably the ships officers although their oilskins hide any indications of their rank.  Emerge on the foredeck of the large fishing schooner to take the noon sighting.  The left-hand figure holds a sextant and adjusts it as the sun moves overhead; the other man reads his instrument to calculate the ship’s longitude.  Their task, fixing the ships location, is made more difficult by the passing storm, for the heavy clouds prevent a clear sighting.  Homer presents his sailors as strong, dedicated men, and draws their sextants with accuracy and precision.  But unlike his temporary Thomas Eatkins, neither the men’s personalities nor the intricate machinery in which they work fascinated Homer.  Rather, he was absorbed by the sea and the changing light, as the storm passed.  In 1890 Homer painted A Summer’s Night also in Prout’s neck Maine.  A summer’s night is the most idiosyncratic of his paintings.  This style is very unlike Homer and he rarely paints in this manner.  A summer’s night is one of Homer’s most emotional works. 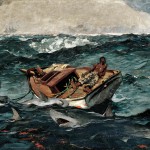 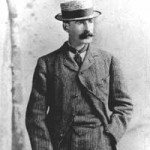 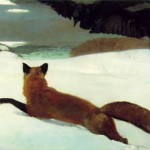 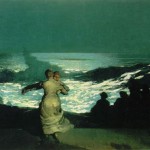 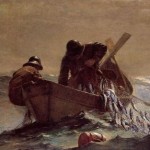 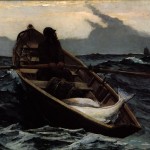 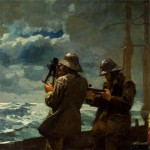 Alfred Trumbell explains that across the fore ground goes the platform of a seaside hotel, perched on a rocky buff above the surf.  On the platform two girls dance as partners, their figures lighted by the lamplight from the house.  Below this platform, figures make a dim group on the rocks, watching the breakers.  On the rollers an unseen moon makes a great, scintillating pathway to the horizon, and the figures of the dancers are modeled against it.  One of Homer’s most important paintings is The Fox Hunt it is the largest of his paintings and it was done when Homer was 57 years old.  This painting is said to contemplate his own death.  Themes of loneliness, isolation, and mortality had occupied him from the beginning and by the time he reached artistic maturity in the 1880’s his paintings invariably from narrative cycles, which repeat obsessively the progression from life to death.  In the depths of winter it has been observed that a flock of half starved crows will occasionally have the temerity to attack a fox, relying on the advantage of numbers, the weakened condition of the fox and the deep snow, which makes it peculiarly difficult for the fox to defend himself or to escape.  Homer has painted this extraordinary scene, the fox ordinarily the hunter, here is attacked and from an unexpected villain, black crows.  They are the source of mystery and death in this scene.  Red berries in the snow to the left foretell the drops of blood that will soon be shed.  The first two crows are just the beginning of the attack: their wings spread they will alight on the fox and go for its eyes.  Nineteenth-century painters dealt frequently with violence and death in the animal world, and animals are seen attacking other animals in the works of Stubbs, Delacroix, and Courbet.  Homer’s painting, however conveys a special power and urgency.  Even its title: The fox hunt is Ironic because fox hunts are usually civilized in art.  With dogs and men but this is just nature and it is the fox being hunted by crows.  This is very unusual.  Homer is the fox and he is being hunted.  And he is as lonely and angry as the fox in his painting.  Homer demonstrated many styles of art and captured the true meaning of everyday realism.  His brilliance is shown throughout his artwork and one can only capture the real meaning of his work from behind the paint.