Sir Winston Leonard Spencer Churchill was born at Blenheim Palace on Nov. 30, 1874.  His father was Lord Randolph Churchill, who descended directly from the 1st duke of Marlborough, of whom Winston was to write a biography.  His mother was Jennie Jerosme, an American.

Churchill’s childhood was unhappy.  He spent most of his time at school, something he didn’t really love. His teachers’ characterized him as 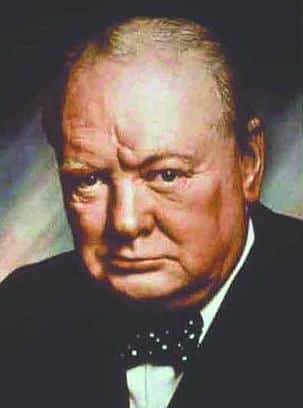 bright, but stubborn and obstinate. He loved to read history and poetry, however, and was fascinated by soldiers and battles. From childhood he had an extraordinary memory. Winston Churchhill didn’t want to go to university. Instead, he enrolled in the Royal Military College at Sandhurst. He graduated in 1894. After service in Cuba and India, he worked as a war-correspondent in Northern India, Sudan and in South Africa, where he was captured by the Boers. His daring escape made him an overnight celebrity. Churchill always wanted to become a politician. His wish came true in 1900, when he was elected to the Parliament as a Conservative, and he quickly made his mark.  His political sympathies began to change, however, and he “changed sides” in 1904, when he abandoned the Conservative party for the Liberals.

When the Liberals came to power in 1905, Churchill entered the government as secretary of state for the colonies.  In 1908, the year of his marriage to Clementine Hosier, he became a member of the cabinet as president of the Board of Trade. Winston’s political missions became more and more important; in 1910 he became a member of the Admiralty. In 1913-1914 Churchill completed British naval preparations for war. During World War Churchhill made some fatal mistakes in war strategy. This was one of the main reasons that he was removed from the Admiralty when the Conservatives (many of whom now detested him) joined the government in 1915.

After a period of active military service in France, he was re-elected in the Parliament. He became minister of munitions under the Prime Minister David Lloyd George. He subsequently served as secretary of state for war and air and for the colonies and helped negotiate the treaty that created the Irish Free State.  But he lost both his office and his seat in Parliament when Lloyd George’s coalition government fell in 1922.

Over the next year or two, Churchill gradually moved back into alliance with the Conservatives.  He used to remark with a mischievous twinkle, “Any fool can rat, but I flatter myself that it takes certain ingenuity to re rat.” Returning to Parliament in 1924, he was offered the post of Chancellor of the Exchequer in Stanley Baldwin’s Conservative government (1924-1929).  It was in this position Churchill maybe made his biggest mistake as a politician: He revalued the pound, giving the currency a fixed value against other currencies, to better the rather poor economic situation. Churchill took this step with many misgivings, and it proved a mistake, worsening the poor economic situation. Afterward he made efforts to heal the grand failure with labor, but he was never entirely successful. Between 1929 and 1939 Churchill did not hold office.  He disapproved violently of Baldwin’s Indian policy, which pointed toward eventual self government.  At the same time he warned against the ambitions of Nazi Germany and urged that Britain should match Germany in air power.  As World War II drew nearer, his warnings were seen to be justified.

When general war broke out in September 1939, Churchill was offered his old post of first lord of the Admiralty by Prime Minister Neville Chamberlain.  Following the unsuccessful allied attempt to “remove” the Germans from Norway (for which Churchill had large responsibility) Chamberlain determined to resign. Churchill replaced him as prime minister as Germany invaded the Low Countries on May 10, 1940. The Prime Minister Winston Churchill was largely responsible for many aspects of war policy.  He established personal relations of the highest value with U.S. President Franklin D. Roosevelt who began to supply arms and weapons to Britain immediately after the British army lost most of its equipment at Dunkerque (June 1940).  In the late summer of 1940, as the Battle of Britain raged and no one knew whether Britain would be invaded, Churchill daringly diverted an armored division, one of only two in Britain, to the Middle East.

Although no one had been a more convinced opponent of the USSR than Churchill, he decided immediately to give help to the Soviet Union when it was invaded by Germany in the summer of 1941.  The entry of the United States into the war at the end of the same year gave the Allies the advantage in greater resources. But the new shape of the alliance also meant that Britain’s influence was bound to decrease as the USSR and the United States joined in with full power.

Churchill was determined that the slaughter that he had seen in World War I should not be repeated.  That is why he refused to attempt an invasion of mainland Europe until North Africa and the Mediterranean had been cleared of the enemy.  The Allied invasion of Sicily and Italy, “the soft underbelly of the Axis,” finally began in the summer of 1943, to be followed a year later by the Normandy invasion, the “Operation Overlord”. By this time, however, Churchill carried less weight at conferences and in the general formation of war strategy. For example, Churchill did not then foresee the full Soviet threat. At the time of the Yalta Conference (February 1945), Churchill had high confidence about Soviet intentions.  He soon came to a different opinion, and in 1946 he spoke of the “iron curtain” that had descended across Europe.

Although Churchill wished to keep the wartime coalition government in power, a general election was called in Britain in July 1945.  Then, after the unconditional surrender of Germany and just before the final collapse of Japan, the Conservatives lost the election. When the first results were received, showing a substantial swing to the Labor party, Churchill was taking a bath.  He remarked: “There may well be a 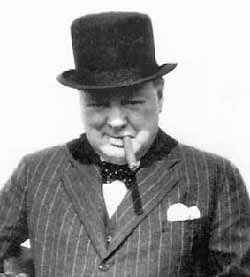 landslide and they have a perfect right to kick us out.  That is democracy.  That is what we have been fighting for.  Hand me my towel.”

The Labor party took office with a large majority after World War II. Churchill was somewhat hurt by this, he felt that the electors had rejected him as their leader, and he determined to reverse it.  By the end of 1951 he was back in power, with a small majority.  Although he never quite matched in this last phase as prime minister the performance of his wartime days, his energy in the first year or two remained astonishing.  Churchill gave authority to the administration, only his presence as prime minister helped to stop criticism. People had great respect for Winston.

In July 1953, soon after his knighthood, when he could add “Sir” to his name, he suffered a stroke.  Sir Anthony Eden, whom Churchill had long wanted as his follower as prime minister, was himself ill at the time, and part of Churchill’s motive in remaining in office was doubtless to ensure that Eden was not cheated of his succession.  Churchill finally left office in April 1955, and Churchill’s favorite follower Eden became prime minister of Great Britain.

Churchill occupied to the end the affections of the British people, symbolizing the magnificent national performance in heroic days. Sir Winston Churchill was maybe England’s greatest leader (and biggest cigar-smoker) ever, and as Britain’s leader through most of World War II, he personified resistance to tyranny. Sir Winston Churchill died on Jan. 24, 1965, 70 years to the day after his father, at the age of 90.