James Buchanan was born in April 23, 1791 in a cabin in Cove Gap, Pennsylvania. James father came to America as a Scotch-Irish in 1783. At the age of six his family moved to Mercersberg PA. Where his father would open a general store. James was the second of eleven in his family. James was able to go to school where he lived but when he was not studying he was helping his father in the shop. 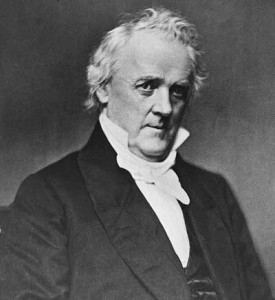 father died. At the age of sixteen James father sent him to Dickinson College in Carlisle PA. James was a serious student but he also wanted to have a good time. He began to smoke a drink with the other students, and later was expelled from college. He begged for them to take him back, and he would turn over a new leaf. He was allowed to return and graduated on high honors. After college he left and went to study law in Lancaster PA. James worked hard and later became a successful lawyer. He made more than 11,000 a year. James became a candidate for the Pennsylvania legislature in 1814. But the war of 1812 was growing fast. The British Had just burned down Washington D.C. James volunteered to serve his country so he joined a cavalry company. Buchanan returned for the election and won a seat in legislature in 1814. He served another term and returned to Lancaster.

James Buchanan became a popular person in Lancaster and was invited to many parties and dinners. At one party he met a girl named Ann Coleman. They later got engaged. In the spring of 1819 there were rumors that James was seeing another girl. Ann got upset and went to stay with her sister in Philadelphia. Later she died over an overdose of landuam. James promised to never marry again.

James went back to politics to try to forget about Ann. The Federalists party was looking for someone to run for candidate for congress. James agreed and in 1820 he was elected to House of Representatives. He served for 10 years. During the time in Congress Buchanan changed his part to Democratic. In 1831 President Jackson asked James to become minister to Russia. James agreed and went to Russia the next year. While he was in Russia he made the first trade agreements between United States and Russia. When he came back to the USA he was elected to the Senate. There he would serve till 1845.

By 1844 he waited for the president nomination and gave all his support to James Polk. James Polk won the nomination and election. Then President Polk assigned James Buchanan to the secretary of state. While Polks term of President a war broke out between USA and Mexico. James Buchanan as Secretary of State arranged a peace treaty in 1848. By this treaty United States purchased all the land from Texas to the Pacific Ocean.  When Polk left office Buchanan also retired. For four years he lived in the country and bought a Mansion near Lancaster PA. James could not stay away from politics. In 1852 he was a candidate for the running of president. He was beaten by Franklin Pierce; President Pierce made James minister to Great Britain in 1853. While Buchanan was in England congress passed the Kansas-Nebraska Act it permitted slavery in regions of the Northwest. When the Democratic met in 1856 to pick a candidate for president they wanted someone who would be wanted by the north and the south. They elected Buchanan and he beat Millard Fillmore in the race. Buchanan became the first bachelor to become president. He also became the first man from PA to become president. On March 4, 1857 James was elected president.

Two days after James’s inauguration the Supreme Court declared the Dred Scott case that Congress did not have any power over slavery. James played a big role in slavery. After James retired from politics he went back to Lancaster were he would die seven years later.