Amendment #14 punished the south for the entire rebellion, and the Civil War. The way that Congress made the law made it seem that it was helping the Freedmen, however, most of the sections are directed to the south, or made so that the only people who would violate these sections would be the southern states.

Paragraph 1 states that Ex-slaves made citizens if they have been born in the United States. This part doesn’t hurt the south, in fact, it gives them an advantage on the number of reps in the House. It also helps the freedmen since it is giving them full rights as U.S. citizens and 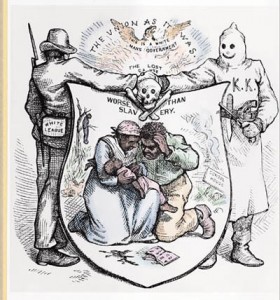 equality in the U.S.

Paragraph 2 states that when a state denies citizens (freedmen) the right to vote, its representation shall be reduced. This is obviously hurting the southern states since the southerners didn’t want the freedmen voting, they would be losing their representation in the House. However, for this to be effective, the person must meet the current voting requirements.

Paragraph 3 states that People who have been in rebellion are ineligible for federal and state office. In other words, if you were a military or political leader for the Confederate States of America, than you can’t hold any United States, or individual state office. This is punishment to those leaders of the Confederacy who have committed an act of treason. This is a suitable punishment for these people who are not suited to hold any office.

Paragraph 4 states that debts incurred in aid of rebellion are void. This drastically hurts the people who supported the south. If someone had sold products to the south, expecting that after the war they would get paid a great sum of money, than they would get nothing from the United States government and nothing from those states. This was a sort of “payback” for those people who aided the south.

These first four paragraphs, which three of them have to do with hurting the south and only one to help the ex-slaves, have shown that this amendment was what the south got for having this Civil War. Without this amendment, the southern states could have gone unpunished, and possibly start another rebellion. This amendment obviously goes against the south, due to all of the paragraphs which have something directly to do with what the south did. Taking all this into account, the south, having started this war by attacking a U.S. fort, deserved it.