The movie Arsenic & Old Lace is based on the play about a movie critique who’s two aunts , choose to put lonely men out of there reason by poisoning them . Little do they know that there nephew, Jonathan, who left them when he was young, has killed just as many people as they did. Much to Jonathan’s surprise, the aunts killed just as many men without the plastic surgery, without the running, they just sat right there .

“Charge…” we hear as Teddy Brewster runs up the stairs. This character brings out the most comedy in the picture. Teddy is the only character 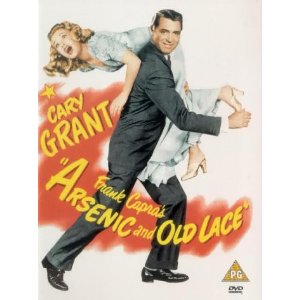 in the movie that proves to be insane in my opinion. Any man who thinks he is a dead president (TDR) has to have some problems.

The plot unfolds when Mortimer Brewster finds out about his aunts secret after finding a present in the window seat. Mortimer panics and runs all over trying to take care of his aunts and keep them safe at the same time.

Most of the time in this movie the comedy is poor in this movie, you can tell that its obviously set in the mid 1900’s. The story in the movie is actually very good, it kept my attention throughout and is one of the few I seen of its kind. This movie is great for anyone who enjoys classic comedies, even if you don’t, go out and rent this one. You might not be disappointed.