After viewing the film Bowling for Columbine by filmmaker Michael Moore many emotions ran through mind.  At first I felt depressed and 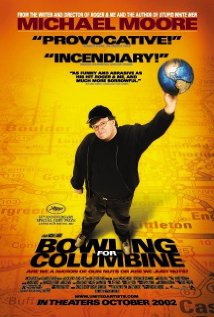 embarrassed that America could let the important issue of gun control get so chaotic.  Later I thought more about how Moore skewed the film so I could feel his intended thoughts.  So I came to the conclusion that Moore did make a very powerful point but with a very strong filter.

Just like any photograph, film, magazine article or any other form of media there will always be a filter.  In this particular film, Moore uses a long filter to make a powerful statement about gun control with a grand social standpoint.  In the beginning scene of the film, Moore goes to a bank where they give you a gun if you open a bank account.  At the end of the scene Moore walks out of the bank with a gun that appears to be given to him right away.  What Moore didn’t tell you is the scene was actually shot in two different takes, one where he opens up a bank account and then another two weeks later when he receives his rifle.  Having the use of an editing program such as Avid, the filmmaker can combine the two separate scenes into one so it looks as if everything occurred on the same day.  So many of the powerful scenes in the film could have been altered completely through editing to prove the filmmakers own point.  In the very last (and powerful) scene with the president of the National Rifle Association, Charlton Heston, Moore drills at Moses, I mean Heston about various problems with the right to bear arms.  After many questions, which Heston never fully answers, he walks away in anger.  Since only Moore and his camera crew were there it is hard to tell if what we saw in the film was the full conversation.  Moore could have easily edited out an important comment that Heston said or something of that context, but we will never know because Moore has the ability to morph his view in the film he wants the viewer to see.  Moore doesn’t want the viewer to think about anything pro gun, he wants the audience to only see and hear what he feels will support his point o f view

In filmmaking, when people hear the word “documentary” they assume that what they are witnessing is real and rarely question what they are viewing.  Generally, when a documentary is made, the film is supposed to take an objective standpoint and let the viewer analyze what they have seen.  If you take a step back and accept that Bowling for Columbine has a long filter, the question of reality appears to be more important.  Yes, Moore filmed real people in the real world but was every situation truthful?  It is impossible for anything that is documented 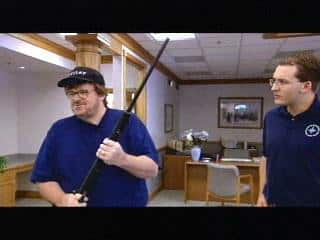 to be fully truthful considering people see the world in different ways.  For example: when the two airplanes crashed into the World Trade Center in New York millions of people watched it happen live and there is no dispute that two planes hit a building but there is a distinction in the way people saw it occur.  In the same mindset, Moore’s film cannot be considered reality because you can never fully record reality.

Some other troubles with creating reality on film are the effect holding a camera in someone’s face will do.  It is in human nature to act one way by themselves and another when they are with other people.  If you add a camera to the dilemma it makes it impossible to ever really know if the person being filmed is being their true selves.  In Steven Spielberg’s Catch Me if You Can, Leonardo DiCaprio says “the world only knows what you tell them”.

No matter what the filter was or how it was used in the film.  Bowling for Columbine is a gripping portrayal of the problem America is currently facing with gun control.  When Moore shows the footage of the two teenage assassins in Columbine high school it his horrific and moving.  Even though Moore’s opinion is completely slanted and not objective it sends a clear message that the United States has a serious problem with gun violence and there needs to be some kind of intervention.  When a six year old child has the ability to bring a gun to school and kill another classmate that is a societal failure.